If you visit Samarkand and after exploring all the architectural sights of this ancient city, you would suddenly want something different, then for sure go to the small town of Urgut located 40 km southeast of Samarkand. What is so attractive about the city of Urgut and its surroundings? First of all, this is a famous place called Chor-Chinor, with a whole alley of 1000 year (!) old plane trees and a mosque of the early 20th century. A little higher above this complex, archaeologists found remains of the Nestorian church of the IX century. From here begins the road to Urgutsay river gorge, where you can visit the picturesque mountains. Urgut is also famous for its huge bazaar, where on Sundays people come almost from all over Uzbekistan to purchase various goods, including national clothes, shoes, fabrics, household items and much more, produced by local craftsmen of traditional crafts. Aisles with antiques, old decorations, suzane, robes and chapans attract foreign tourists here. And on the neighboring "mais bazaar" there is a brisk trade in dried fruits - kishmish, prunes, dried apricots. The famous Urgut kishmish (raisin) is known by many. Here you can witness the diverse and motley public typical of Central Asia - women and grandmothers dressing in traditional clothes, grandfathers in turbans with magnificent beards. Very colorful places.

Urgut is a small town (pop. 35,000, and 60,000 with neighboring villages), located at the foot of the Zerafshan Range at an elevation of 1,000 m above sea level, about fifty kilometers from Samarkand. The whole of Uzbekistan knows that very poor people live there; the whole of Uzbekistan goes there to shop at a huge bazaar practically in the open field; the best Uzbek suzane is sewed in the nearest villages; and there is a grove of a thousand years old (!) plane trees, which are so large that in one of them a room is made.

Uzbekistan can’t boast of interesting small towns – it is either big cities, or small villages and deserts and mountains, but Urgut is a total exception, perhaps it is the most picturesque small town of Uzbekistan.

If you plan to travel from Samarkand then the best way is to catch a shared taxi (45 minutes) from a stand at the corner of Dagbet and Registan. At the turn to Urgut - a monument to the heroes of the Great Patriotic War. The road after the turn from highway is in very bad condition, with "asphalt" turned into rubble all 20 km to Urgut. 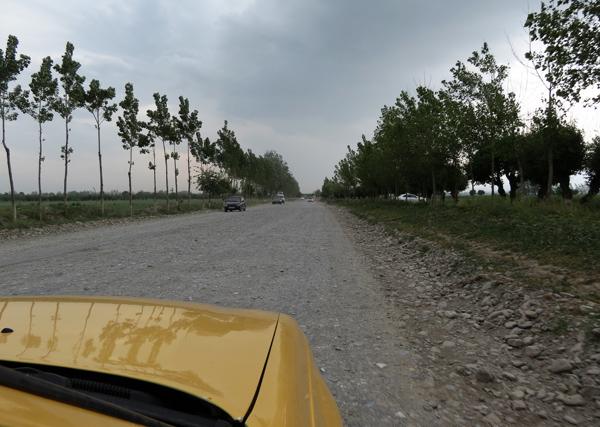 The fact is that in Urgut live "Urgutlik" - one of the Uzbek tribes, half a million of whom are scattered throughout Central Asia up to Afghanistan. Some consider them to be Uzbeks, others - Tajiks, but from the scientific point of view their language is Uzbek, but with an abundance of Tajik words.

Urgut panorama is dominated by Mount Allaeran (2096m), which means "God is with us!". 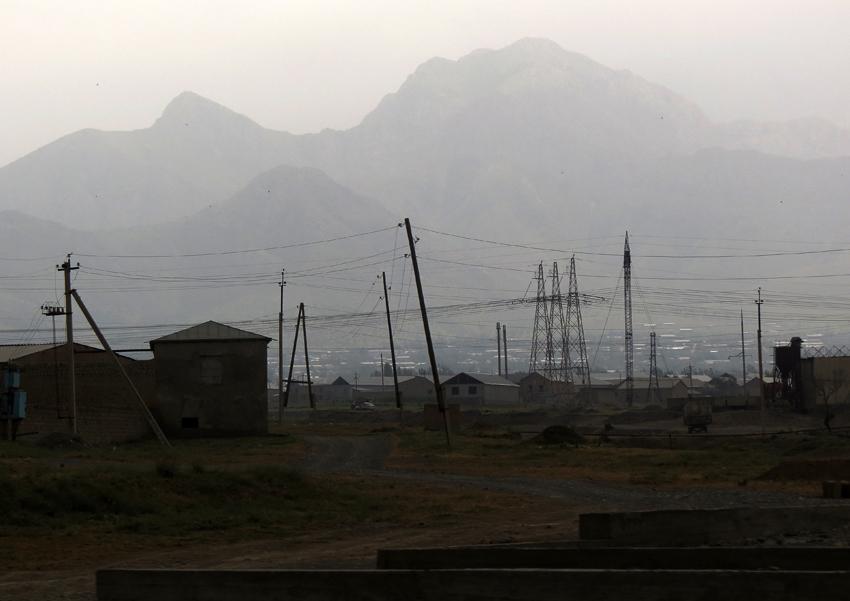 Due to severe poverty, Urguti leave the hometown to earn money all over the world, and mostly not even in Russia, but more remote and more profitable for Uzbeks Turkey, Korea, America ... And they bring a lot from there, buying in bulk and selling at home - therefore Urgut’s bazaar is famous in the whole of Uzbekistan as the cheapest one. It is so large that it is located not in even in Urgut itself, but outside the city, and is on a par with the largest bazaars of Tashkent. 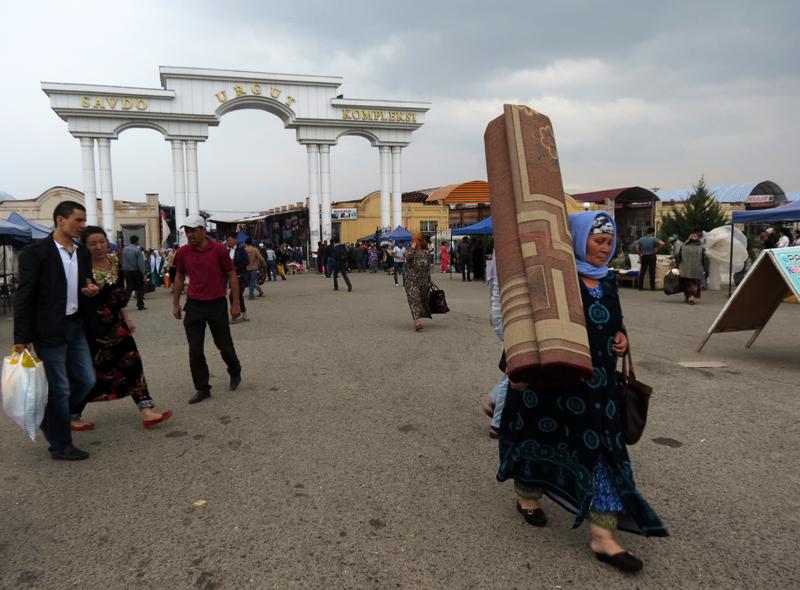 Basically, the Urgut-bazaar is an ordinary clothing market, with colorful sellers and buyers, but the most common consumer goods:

This town’s bazaar is one of the best places in the country to buy jewellery, suzani and antique clothing. Prices are lower and the quality on par with anything sold in Samarkand and Bukhara, but you’ll have to negotiate hard. It overflows with tourists in the high season – go in the low season when tourists are scarce and prices drop even further. Arrive at the crack of dawn for the best selection. While the bazaar is open every day, the textile and jewellery section, located at the back of the main bazaar, only happens on Sunday and Wednesday, and to a lesser extent on Saturday too.  Among the goods offered at the bazaar you can find antique carpets, manually embroidered tapestries (suzani), leather footwear, jewellery, artistic metal items, ceramic tableware, beautiful wooden boxes and other stuff. 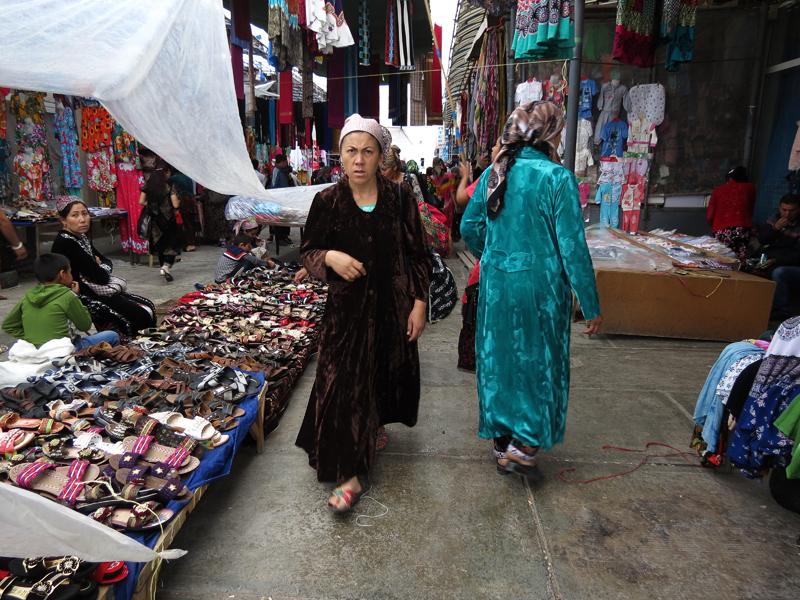 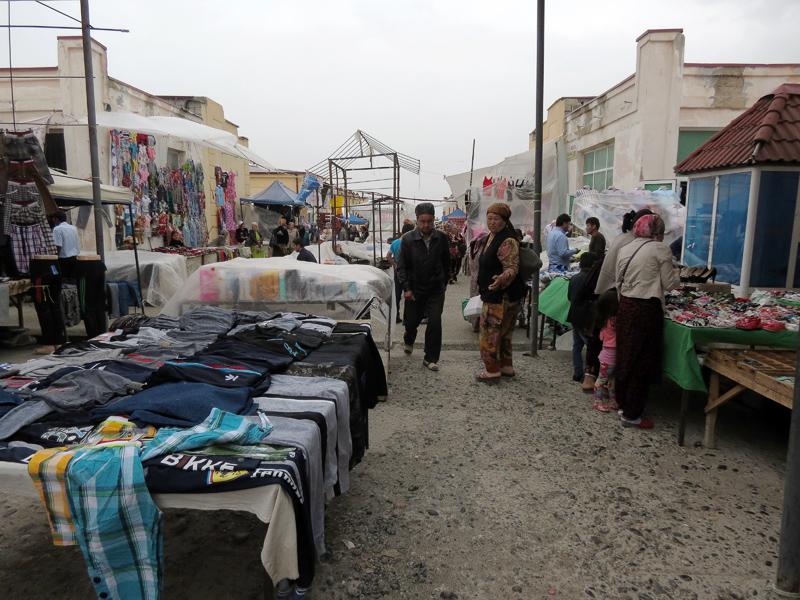 Urgut is actually divided into two parts - Lower and Upper Urgut, with Upper to be the center. 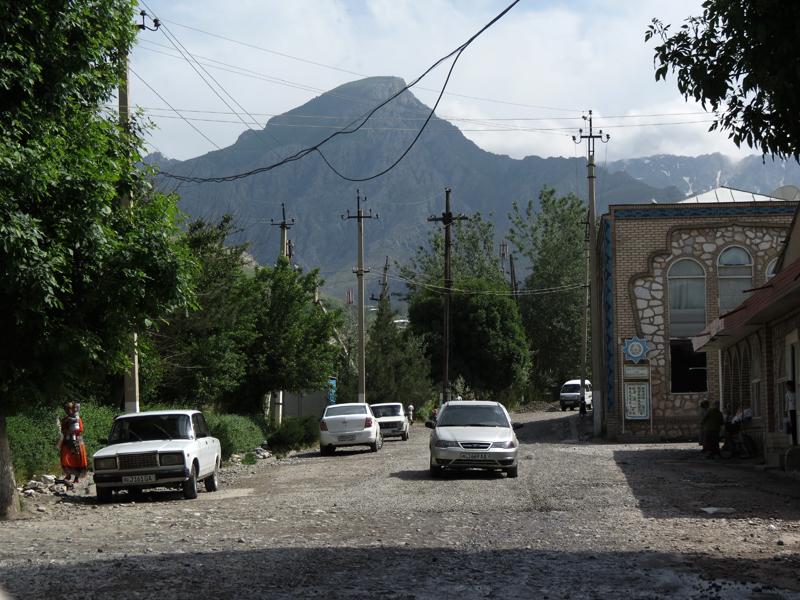 The town is stretched along the fast mountain river. Somewhere in the lower part of Upper Urgut along this river stretches the boulevard with town’s main square. There are a few pretty picturesque buildings in the center, apparently emphasizing the role of the "capital" of the small but proud clan of Urguti. 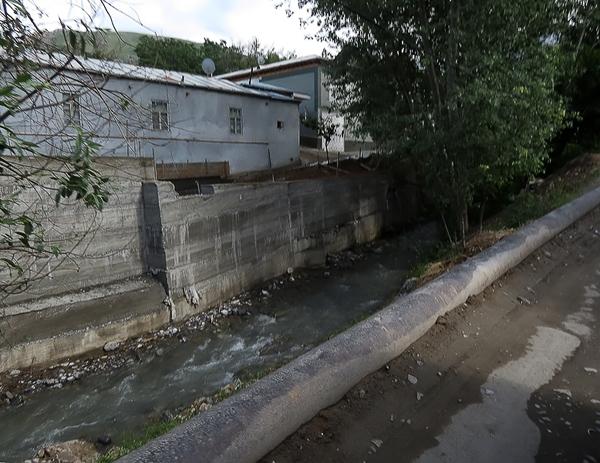 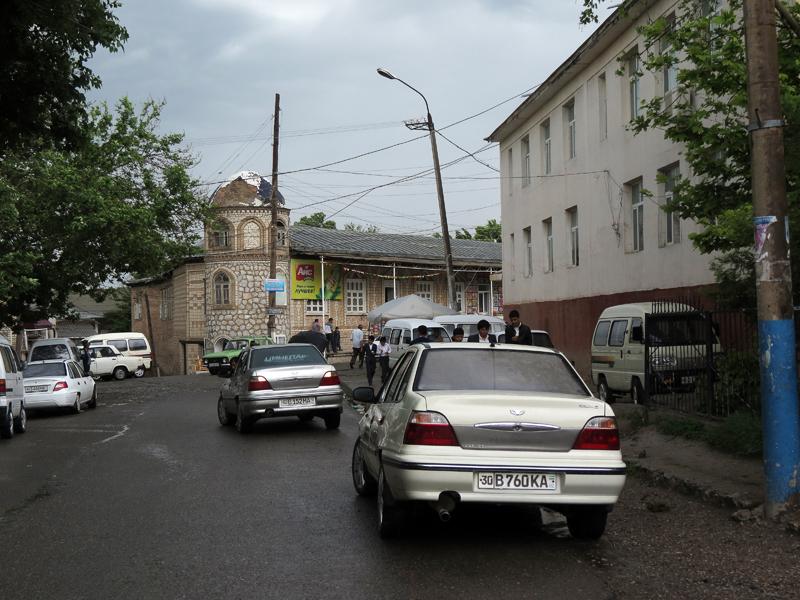 The status of the town Urgut received only in 1973. It is known that in the late Middle Ages, Urgut was a fortified fortress that controlled the way to Shakhrisabz. In the days of the Bukhara emirate, Urgut was first the center of the province (bekstvo), and then for a while existed as a formally independent Bekstvo, submitting to Bukhara only nominally. Since the 18th century, Urgut was ruled by Uzbek military mingi governors. Russian troops during the war with the Bukhara emirate seized a strategic fortress (1868).

It was widely believed before that Urgut was founded in the 17th century, however, the Arab chronicles mentioned some town Vazkurd or Varkud, in the mountains over which the Nestorian monastery still functioned in the 9th century. In the late 1990's near Urgut in the place called Suleimantepa in the mountains Ukrainian archeologist Alexei Savchenko found the foundation of the thousand-year Nestorian church, probably the largest monument of ancient Christianity in Central Asia - and this means that Urgut is much more than a thousand years old. 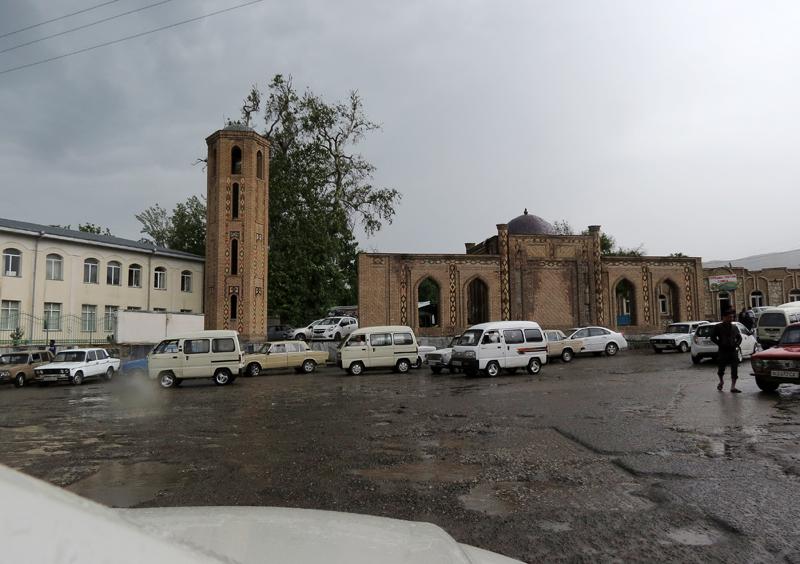 From the main square we went up along the diagonal river, and further along winding streets. 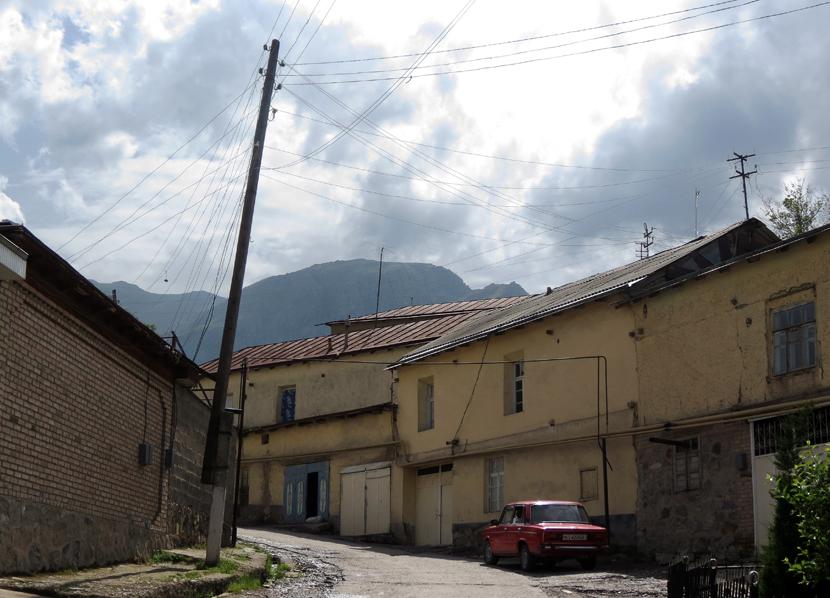 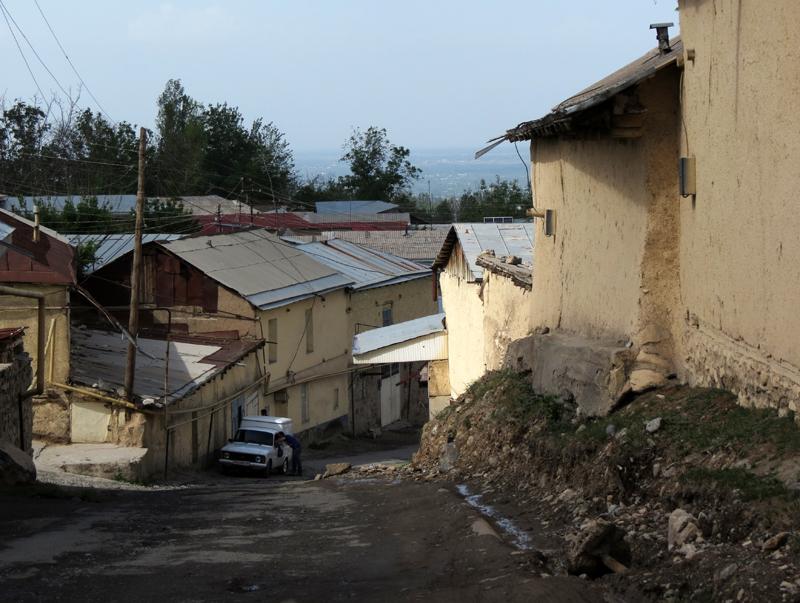 Urgut is not the highest situated town, but perhaps the most mountainous in its landscape. It has a lot of narrow winding streets that lead to the highest point and the most amazing place of Urgut: Chor-Chinor (‘four plane trees’). In truth, there are forty gigantic plane trees (oriental planes) growing on the site, not four. The oldest of them is 1,100 years old, its trunk is 10 m in circumference and the hollow in it can shelter 10 adult persons. According to legend, four of the trees were planted by Arab military leader and sheikh Khoja Abu Talib Sarmast in the 9th century, as the Arabs had conquered Central Asia. He then became the ruler of Urgut and later was buried under the trees. This spot became a cultic place and afterwards a mausoleum was constructed over the grave and a madrasah and mosque were built near it. 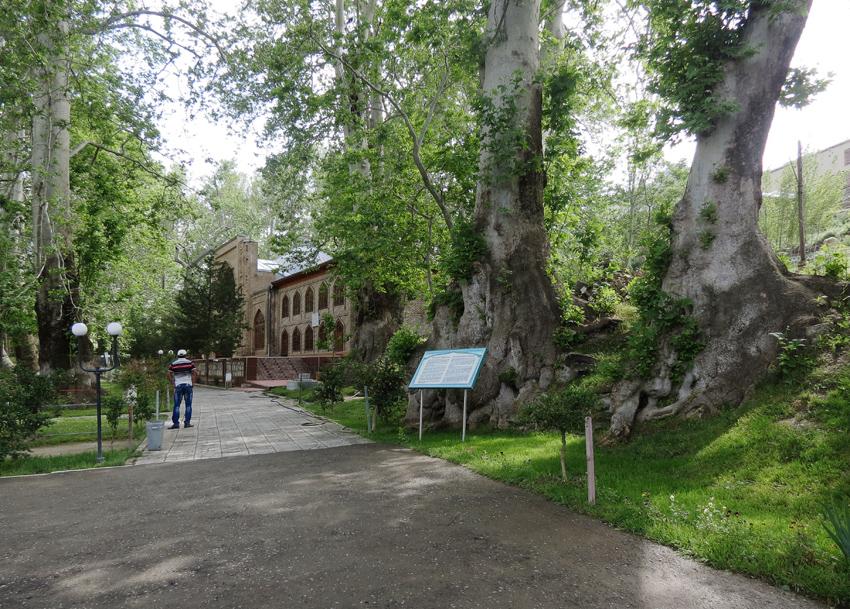 Lower Urgut is quite flat and much more ordinary, just another branch of "ordinary" Uzbekistan in the mysterious country of Urgutlik. The view of new buildings near the road to Samarkand is similar to what you will see in the rest of the country. 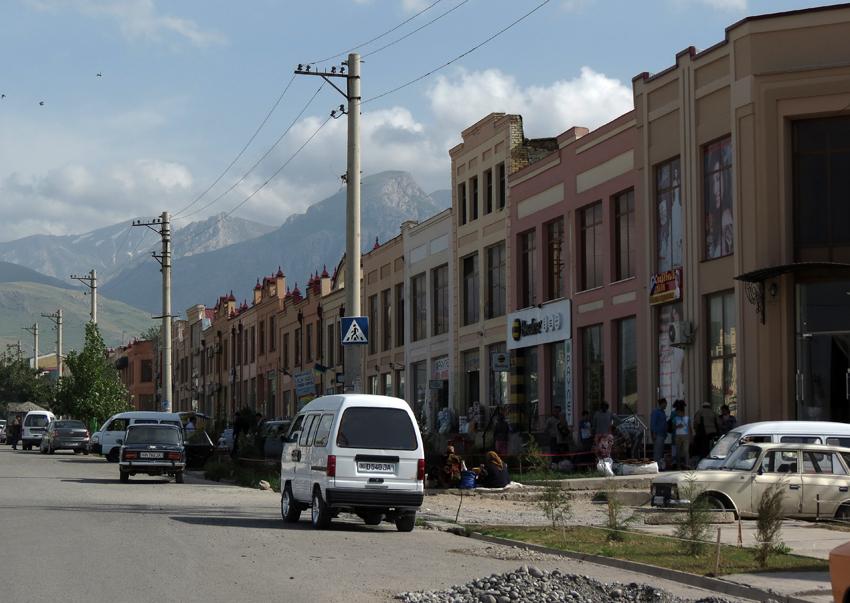 There is an apotheosis of local architecture In the Lower Urgut - a strange 7-tier tower, which serves as a TV tower (which is quite strange to be at the very bottom of the city). Attempts to build here in its own way, not as in much of Uzbekistan are obvious, and this tower at the entrance is perhaps a symbol of the Urgut’s apartness. 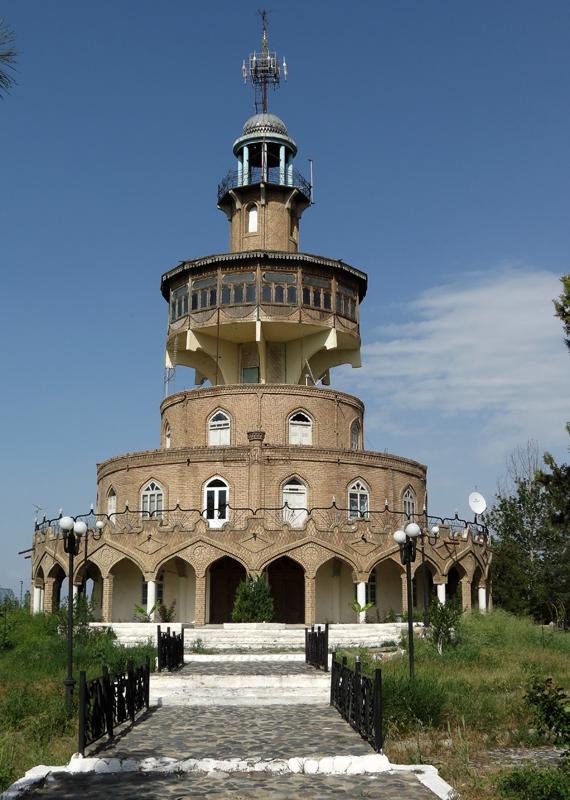 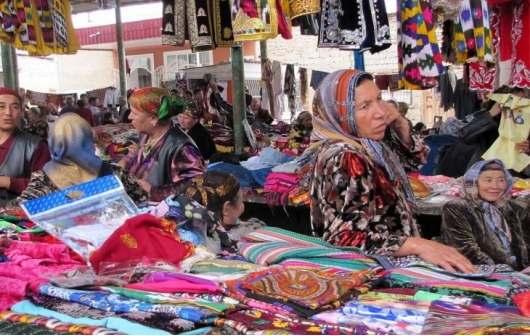 Urgut bazaars
Urgut
Market town of Urgut makes for a very interesting one day excursion. The town that is just 40 km from Samarkand has a huge market selling everything for the locals such as clothing, food and hardware. For the tourist you can find traditional handicrafts such as carpets, metalwork, ceramics and jewellery 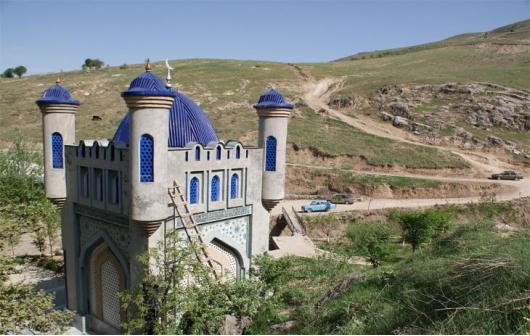 Gavsul Azam mausoleum
Urgut
The main local landmark in Gus settlement the is the mausoleum of Gavsuli Azam - one of the greatest Muslim theologians. The building of the mausoleum has no historical value but still is quite interesting by the design of its domes. 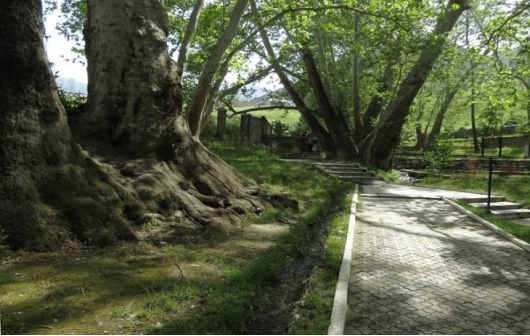 Chor Chinor
Urgut
The ancient garden Chor-Chinor (translates as ‘four plane trees’) is one of the most interesting places in Urgut. The garden is about 3 km from Urgut’s city center with very picturesque road leading up to the grove of fifty very old plane trees with approximate age ranging from 800 to 1,200 years. Some of the elder trees measure 10 m in circumference. Narrow, winding long streets, high clay houses, colorful ethnos: it all resembles the quarters of the old part of Bukhara. 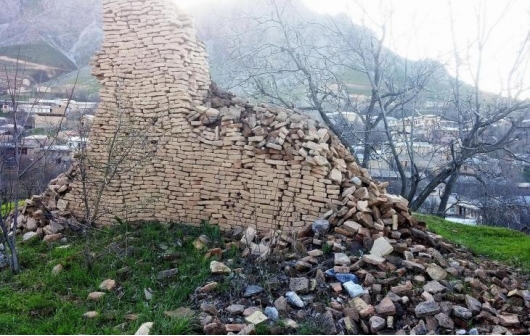 Nestorian monastery ruins
Urgut
Apart from the other landmarks Urgut is also known for the ruins of an ancient Nestorian temple. In fact, the first mention of Urgut in written sources is related to the location of a monastery of the Church of the East that archaeologists were seeking for a long time and only succeeded in 1997.