"Termez had a typically Soviet feel to it, with large, spacious roads, ordered flower beds, parks, ugly high-rise blocks of flats and an unattractive, modernist clock tower - mandatory for all aspirational Soviet cities. Despite the innate shabbiness of Soviet-era cities, Termez was prosperous and the infrastructure laid down during the Soviet/Afghan war was still largely intact. During the war, convoys of tanks and lorries trundled across the ironically-named 'Bridge of Friendship' into northern Afghanistan. The war had dragged on, and more and more Soviet top brass were relocated to Termez from Moscow, ensuring that the city rose above the average standard of Uzbek provincial towns and provided amenities for the swelling number of Russian skilled workers and army personnel."

The city of Termez is the final frontier. Few foreigners venture this far south, save those heading across the border into Afghanistan, and so making the journey seems like quite an adventure regardless of whether you are continuing across the border or not. From ancient Buddhist monasteries to medieval mausoleums, there is plenty to see, all nestled in the sweeping curve of the mighty Amu Darya.

Modern-day Termiz (population 130,000) bears few traces of its colourful cosmopolitan history. However, set in attractive landscapes on the fringes of town are some ancient monuments and sites attesting to more glorious times.

Present day Termiz has retained an edgy, Wild West border-town feel. A steady flow of contraband from Afghanistan crosses the Amu-Darya here on its way to Europe, as well as contraband alcohol headed into Afghanistan.

North of Termiz, the baked landscape twists and contorts itself into a mesmerising collage of canyons, cliffs, grottoes, buttes, mesas, peaks and rubble, all rendered in the tawny, inimitable hues of the desert. This is Surkhandarya, Uzbekistan's southernmost province. The region's caves provided shelter for primitive humans some 50,000 years ago, and the area that would become known as the Surkhan Oasis in the Bronze Age continued for a millennium to function as an important prehistoric hub of human civilisation.

Today, sparsely populated Surkhandarya feels a world apart from the rest of Uzbekistan. Off the highway, transport is more likely to be by donkey than by vehicle, and long mountain walks might lead you through villages that have little contact with the outside world. Temporary bazaars erupt seemingly out of nowhere, blanketing the desert in a pulsating quilt of colour before disappearing. Houses blend seamlessly with the earth from which they were fashioned.

A popular tourist destination for outdoorsy types in Soviet times, Surkhandarya looks set for a revival after a new train line traversing the province opened in 2009.

Termez marks the border between Uzbekistan and Afghanistan, and its history is therefore inevitably caught up with developments in both those territories.

In the wake of Alexander the Great's invasion, Greek troops built a line of fortifications along the banks of the Oxus, and Termez grew up at a crossing point on the river. A Graeco-Bactrian city, it thrived financially, culturally and spiritually at the meeting point of Mediterranean, Indian, Persian, Chinese and central Asian civilisations. Termez became a centre for Buddhism and for Gandharan art, a fusion of Indian and Hellenistic styles.

The Bactrian state eventually fractured and slid into decline, torn apart by warring factions. The Arab general Musa ibn Qasim seized Termez in ad689 and proclaimed himself king, only to be overthrown by Caliph Uthman in ad704. From then on, Termez began to look north to central Asia rather than south to Afghanistan.

In the 12th century Termez slipped swiftly through the hands of the Karakhanids, Seljuks, Ghaznavids, Gurids and Khorezmshah and thence into the clutches of Genghis Khan. A census was taken of the population, and every man, woman and child listed on it was killed. The bulk of the city walls was demolished and flung into the Oxus. Old Termez would never recover.

New Termez rose up in the 14th century; Ibn Battuta visited here on his travels. Timur built a line of pontoons across the Oxus so as to tax traffic entering the city; the city's perfume and soaps were particularly valuable commodities.

The third and final city of Termez is a 19th-century creation, a Russian garrison town on the southernmost border of the Russian Empire. A naval base was built on the river at nearby Chardzhou, and military boats monitored the border closely.

For 80 years or so Termez was one of the furthest and most sensitively sealed outposts of the Soviet empire, enforcing an unnatural religious cutoff point between Islam and atheism. From the mid-1990s, it marked Uzbekistan's frontline with militant Islam, until the fall of the Taliban in next-door Afghanistan rekindled hopes of a booming Silk Road commerce. Termez is off the beaten track for sure but a wide variety of Islamic and especially pre-Islamic sights await the well-informed visitor, as does the frisson of excitement that comes from such proximity to the Oxus and Afghan border.

Throughout its illustrious and epic history, Termez has played the role of political and cultural chameleon, switching roles, religions, allegiances and even locations with the consummate ease of a circus performer. Gather its faded stars under one tool and sit back to watch Buddhist monks discuss philosophy with Mongol invaders, Greek garrison guards ogle Soviet tanks and Bactrian Silk Road traders talk shop with modern Afghan entrepreneurs. Over the centuries bridges have become borders and then become bridges again, heartlands have faded to backwaters and cosmopolitan Silk Road junctions have shriveled into a forgotten corner of a neglected republic. Termez is nothing but a survivor.

There are several sights around Termiz that can be visited in a half-day. The further back in time you travel, dislocated in both time and space, the more interesting Termez becomes. The Soviet city merges into the tsarist town to provide some points of interest, but the two previous incarnations of the city, grouped around Old Termez (six kilometres northwest of the city) and the Sultan Saodat complex (nine kilometres  east), constitute the region's star attractions.

The main sights lurk northwest of the city on the road to Karshi. Driving out here you’ll notice various piles of rubble in the cotton fields of what used to be Termiz (and is now known as Old Termiz). These are Buddhist ruins, levelled by Chinggis Khan along with the rest of Old Termiz in 1220.

Today archaeologists are busy trying to reverse some of the damage at Fayoz-Tepe, a 3rd-century AD Buddhist monastery complex 9km west of the bus station. Discovered only in 1968, in recent years it has been restored and a teapot dome put over the monastery’s original stupa, visible through a glass window.

Looking southwest from here, the remains of Kara-Tepe, a Buddhist cave monastery, are visible on the banks of the Amu-Darya, opposite the Afghan border. You need special permission to visit Kara-Tepe.

Closer to town is a slightly younger but still quite sacred edifice, the Mausoleum of Al-Hakim al-Termizi. Its namesake was a 9th-century Sufi philosopher, known locally as Al-Hakim, the city’s patron saint. In a triumph for preservationists, the interior’s cheap plaster ghanch-work, spuriously installed as part of the government’s general monument beautification drive, is being gradually removed to expose the original 15th-century brick.

The mausoleum gets packed to the gills on Wednesday, when the faithful are served lunch. The Amu-Darya and Afghanistan are once again in sight here; photographing the border is forbidden.

Termiz’ other main sights are clustered northeast of town off the airport road. The restored Timurid-style Sultan Saodat Ensemble of mausoleums probably won’t impress you if you’ve been to Samarkand. Buried here are members of the Sayyid dynasty, which ruled Termiz from the 11th to 15th centuries. About 5km closer to town is a real ruin, the mudwalled Kyr Kyz (Forty Girls) fortress. Legend has it that 40 young women lived here in the 11th century after their nobleman-husband was slain, successfully fighting off sex-crazed nomads before eventually succumbing to their own.

It is advisable to avoid Termez in summer when temperatures can reach a blistering 50°C. Winters are the mildest in Uzbekistan and spring and autumn are bearable. Still a highly strategic city, Termez has remained off limits to individual travellers for most of Uzbekistan's independence. There is some confusion over whether you need a permit from the Ministry of Foreign Affairs to visit Termez and Surkhandarya, it's worth checking with an agency. As long as you have an Afghan visa, travellers no longer need a special permit to make the international crossing across the Friendship Bridge and over the Oxus to the Afghan city of Mazar-i-Sharif, just 60 kilometres south. 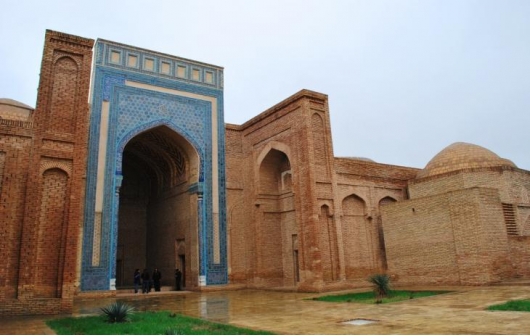 Sultan Saodat Complex
Termez
The cult-memorial complex of Sultan Saodat was developed during the period of XI-XVII c. at the graves of the Termez sayyids. It had a number of cult structures added at different times: mausoleums, mosques and hanagoh, built on the perimeter of an elongated courtyard with a combination of integral and short compositions. 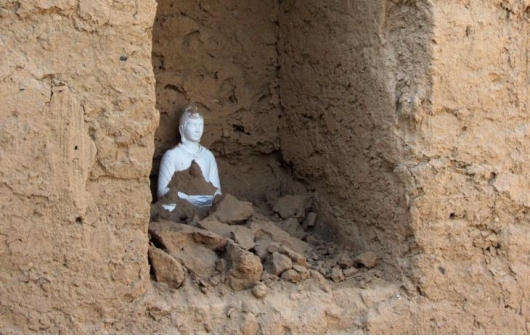 Karatepa
Termez
Caught in the no man's land between Afghanistan and Uzbekistan is Kara Tepe, a rock-cut Buddhist temple complex that is unique in this region. Karatepa is a Buddhist place of worship built on three hills situated in the north-west part of Old Termez. It includes a number of temples and monasteries that appeared in the beginning of the 2nd century A.D. 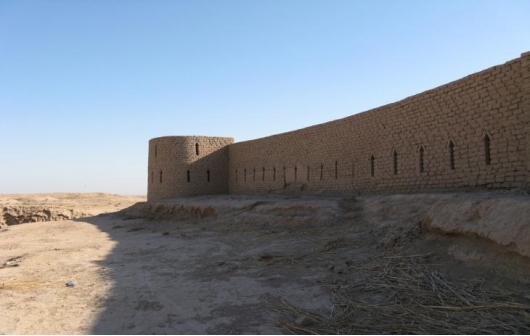 Kampyr-Tepe
Termez
Kampyr-Tepe is one of the oldest archaeological sites in the territory of Uzbekistan. It is ruins of the port city located on the Amu Darya River (Oxus in ancient times), founded at the end of the IV century BC and existed until the beginning of the first century BC. 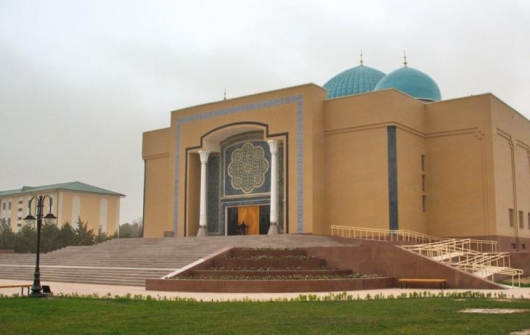 Archeology Museum
Termez
Termez Archaeological Museum fund lists over 27,000 exhibits. They include household pieces: dishes, utensils and many other things; weapons, both ancient and medieval, coins and stamps of rulers, etc. Also, there is a huge collection of paintings and antique sculptures. These are not only sculptures of Greco-Bactrian period, but also Buddhist statues discovered in ruined monasteries of the Kushan period.
Tours in Termez
View all tours in Termez

Uzbekistan Pilgrimage Tour
Tashkent - Bukhara - Samarkand - Kitab - Sherobod - Termez - Denau
8 days
View details
During the tour you will have opportunity to make pilgrimage to the graves of great theologians of Islam as well as to other sacred places. The highlights of the trip are visits to Imam al Bukhari’s memorial complex, the collector of the hadith “Sahih al-Bukhari” and to the graves of great Sufi leaders.

Zoroastrian and Buddhist heritage of Uzbekistan
Tashkent - Termez - Nukus - Khiva - Bukhara - Samarkand
12 days
View details
The history of Uzbekistan fascinates and this 12-day tour is aimed to introduce you to a Zoroastrian and Buddhist cultural heritage of of this country. This tour is for genuine history lovers, for those who is interested in the origin and spread of the great religions, for those who would like to see with own eyes the places of their utmost glory and witness the traces of their fall. A must-do for any history of religion amateur.
Other hotels in Termez
View all hotels in Termez

Recommended
Silk Road Termez hotel
Termez
View details
They have descent options for those on budget. It's well-located and close to some neat restaurants
Room facilities

Recommended
Meridian hotel
Termez
View details
There is not much choice in Termez, but let’s face it: there are plenty of places much much worse you can end up in. Set your expectations right in this part of the world and you'll be all right.
Room facilities