The capital of Qashqa Darya Province, this small city of 200,000 people is a regional hub due to the proximity of natural gas plants and the numerous cotton fields that surround it, all of which are irrigated with water diverted from the Amu Darya. But only few people know that the age of Karshi is over 2700 years. A lot of names of various rulers and heroes are related to the history of this town. The city has Sogdian roots, but it is the surviving medieval madrassas, mausoleums and mosques, not to mention a reputation for producing finely worked flat-weave carpets, that attract an occasional tourist.

Strategically situated on the main 11-day trade route from Balkh to Bukhara, Karshi has transcended previous incarnations as the Sogdian city of Nakhshab, the Arab city of Nasaf and and lastly Karshi, which took its name from the two 14th-century palaces built by the Mongol khans. According to UNESCO researches, as far back as in the 7th century BC some settlement existed on the site of current town. Locating on the Great Silk Road, which went from Central Asia to India and Afghanistan, Karshi was important spot for many invaders. In the 4th century BC Alexander the Great tried to conquer this town and was delighted with the strength of local people. Freedom-loving people always tried to uphold their liberty and independence.

Karshi ('palace' in Mongolian) gets its modern name from the twin palaces built here in the 1320s by the Chagatai Khans Kebek and Kazanby on the site of Genghis Khan's old summer pastures. Until the 14th century the town was called as Hakshab (in some sources Nasaf), but in 1364 Tamerlane ordered to built the fortified palace and moat in what is now the southern part of Karshi, and later the town obtained the name of Karshi (Karshi in Turkic language means “fortification”).  It was into this citadel that most of the town later fled, under siege from the successive campaigns of Shaybani and Abdullah Khan. Successive rulers extended the city walls and constructed caravanserais, gardens and religious buildings.

Beginning from the 14th century Karshi was gradually growing: the violent growth of the town was during the Dynasty of Sheybanids (16th cent.). In the 18th century it became the second important city in the Bukhara Khanate. Major part of outstanding architectural monuments of the city was built during these centuries.

The 18th century saw the city's importance grow as Shakhrisabsz declined and before long Karshi was to become the second city of the Bukharan emirate and the begship of the emir's heir designate. By this time the double set of city walls had expanded to encompass four madrassahs, ten caravanserais, public baths, gardens, a prison and even a secret tunnel which, in times of nomadic incursions or domestic revolt, would provide the palace of the beg with an escape route to the outside world. The city even had the occasional pane of glass-the truest indicator of ostentatious wealth.

In 1868 the Russians annexed the fertile Zerafshan Valley, turning the Kashgar Darya valley around Karshi into the main granary for the entire emirate and, in 1873, the main document that relegated Bukhara to a dependency of Russia was signed in the city, much to the gall of the emir's son, Abdul Malik, who led a brief rebellion here before fleeing to Peshawar.

After a long hiatus, Karshi emerged briefly to international attention following the US invasion of Afghanistan as the site of the Khanabad airbase. Though this was initially used to supply US troops, it was forced to close in 2005 following US criticism of the Andijan events and replaced with the Manas airbase outside Bishkek in Kyrgyzstan.

Karshi is not Uzbekistan's most interesting city but there are a few interesting sights worth exploring if you have some time to kill. Karshi's medieval heart is centred on the bazaar, though you have to look past the 20th-century's less tasteful architectural creations if you're to get a sense of what historic Karshi would actually have been like.

Opposite the busy main bazaar is a remodeled public square containing a scattering of marooned medieval buildings. The attractive, turn- of-the-century Bekmir or Rabiya Madrassah functioned for a time after independence as female madrassah. Madrassah Odina is the single educational institution for women, built in this region. It was erected on the site of khan’s palace in the 16th century, today it is the small museum. It's now home to a couple of workshops. Continue on for 100 metres to the striking blue dome of the heavily restored 16th century Odina Mosque, built on the site of the former Mongol palace. The building (curiously signposted the 'Odina Center of Self Conciousness') houses a fairly useless regional museum, it is the building's domed exterior that is the main attraction.  More interesting is the sardoba (covered water pool) just outside the exterior wall, as this would have been the mosque's main source of water, essential for the faithful to perform their pre-prayer ablutions.

At the other end of the square lie the neglected Khoja Abdul Aziz Madrassah and Kaliz Век Madrassah. These somewhat forlorn structures are caught in limbo due to the government's policies on religion: they can no longer function as religious buildings, but are surplus to other requirements and hence generally lie empty, collecting dust and pigeons where once their students trod. If you ask their guardians, they will be happy to let you inside to look around, and they may even give you a tour. Khoja Abdul Aziz Madrassah once held a fine collection of photos, including one of the emir's personal army on parade. The army enjoyed a wide repertoire of marching songs, one of which was entitled 'Our general is a brave man and does not fear the Bolsheviks'. A story runs that before a battle the emir's troops would dumbfound the enemy by falling to the ground for several seconds, waving their legs wildly in the air, as if in some mass epileptic fit, before resuming the fight. This strange custom apparently dates back to an early massacre by the Russian forces, which took place on the banks of a river. At the end of the rout the Russian troops proceeded to lay on the ground to shake the water out of their knee length boots. The astonished Bukharans naturally attributed some dastardly magic to the victors' bizarre convulsions and the manoeuvre passed swiftly into official military training.

There are several other sights around the bazaar. The nearby park features an Uzbekistan Airways Yak-40 plane that now acts as a video salon, while nearby is a 16th century bathhouse, currently not functioning. Once it was the social centre for men in the city, which legend has it was magically heated by the warmth of a single candle. Karshi's bazaar is well stocked and a good spot for people-watching. On Fridays you'll see numerous men flitting through in long black chapan coats and embroidered skull caps on their way to the Kurgancha and Charka mosques. A fifteen minute walk from here is the Kurgancha Mosque, one of the best attended on Fridays with turbaned believers filing past its deep lutuz and intricately carved pillars. Also hidden in the maze of old town alleys lurk the revived Chakar local mosque and the now defunct, miniature 18th century Sharafbai Madrassah (Ramazan Ibragimov St).

A ten-minute walk east of the bazaar southwest of the bazaar brings you to the Kok Gumbaz Mosque, a pale reflection of its architectural forefather in Shakhrisabz. This very Timurid-looking namazgokh mosque was built at the end of the 16th century as part of a series of architectural buildings given impetus by the great Abdullah Khan, which include the still-standing public baths and bridge over the Kashkadarya. The faithful originally spilled out of side chambers into the courtyard in front of the mosque, but now only the main hall and right hand chamber are used for weekly Friday namaz prayer. A Karimov quote adorns the central tree.

At the other end of Karshi a monolithic ensemble of monumental squares, anonymous Orwellian ministry buildings comprise the alter ego of this rather schizophrenic town. For the truly monumental, pay homage to what is, without doubt, Central Asia's most epic World War II Memorial. One of the largest such monuments in central Asia, its an eclectic mix of plaques, walkways, an eternal flame and a red star-topped tower with a series of stained-glass windows. A series of plaques remember the major Soviet casualties of the war (Leningrad, Volgograd, Sevastapol etc.) and lead up via a 100-metre walkway to an eternal flame, above which stands a 30-metre tower, until recently topped with a huge red star. On the inside of the tower a series of stained glass windows depict Soviet soldiers leaving their mothers and wives as old Uzbek men and young children harvest wheat and cotton to support the front line. Karshi's students tend to hang out in the square, and you'll need to co-opt one of them to locate the elderly guardian with the key to the upper levels of the tower and show you the stained-glass scenes, contrasting images of children harvesting wheat and soldiers departing for the battlefield.

In addition in Karshi you will find such unique construction as brick bridge over the river Kashkadaya. The bridge is 120 meters of length, 8 meters of width and the height above the river is over 5 meters. It was built in the 16th century. Another interesting construction is special domed structure – Sardoba, which was used for water keeping in this dry region. Similar constructions are located in the neighborhood of Karshi. By the way, because of water shortage people dug deep wells: for example in the village Kamuk, on the border of Kashkadaya steppe there is the well with depth of 97 meters.

Today Karshi is the administrative center of Kashkadarya region. The town numbers almost 300 thousands people. It is located 400 km from Tashkent (520 km by highway) and 335 km to the north from the border with Afghanistan. For last years Karshi has been looking very different: new administrative buildings, educational institutions, recreational zones and sports complexes were constructed. The town is constantly growing slowly but in right way. Perhaps, when the tourist potential of Karshi is opened, it would achieve next step of development. 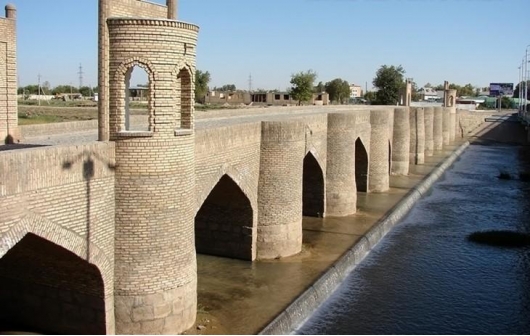 Nikolayev bridge
Karshi
The place where the Uzbekskaya street crosses a shallow and turbid Kashkadarya river is the most interesting construction of the city, the Nikolayev Bridge (Nickolas Bridge). It has 122 meters in length with 10 arches, 8 meters wide, 5 meters high above the water, and it is known since the 16th century, when Abdullah Khan II developed the state program of infrastructure development throughout the Bukhara Khanate 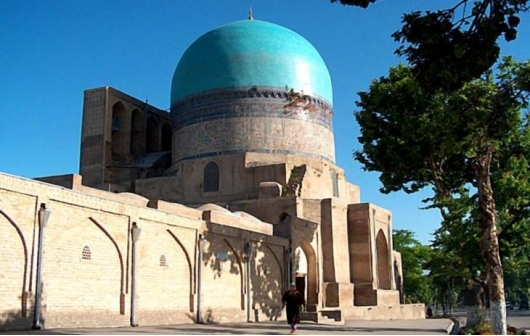 Kok Gumbaz Mosque
Karshi
Kok Gumbaz Mosque in Qarshi is a pale reflection of its architectural forefather in Shakhrisabz. It was heavily restored and not a lot of left of its original structure. This very Timurid-looking namazgokh mosque was built at the end of the 16th century as part of a series of architectural buildings given impetus by the great Abdullah Khan, which include the still-standing public baths and bridge over the Kashkadarya. 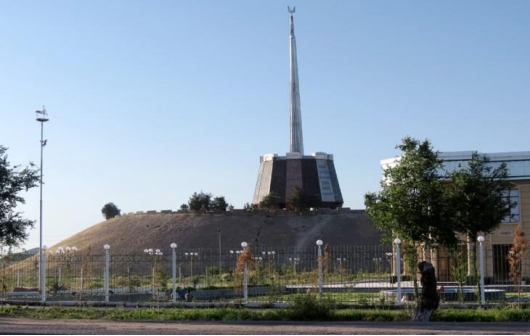 World War II Memorial
Karshi
For the truly monumental, pay homage to what is, without doubt, Central Asia's most epic World War II Memorial. One of the largest such monuments in central Asia, its an eclectic mix of plaques, walkways, an eternal flame and a red star-topped tower with a series of stained-glass windows. 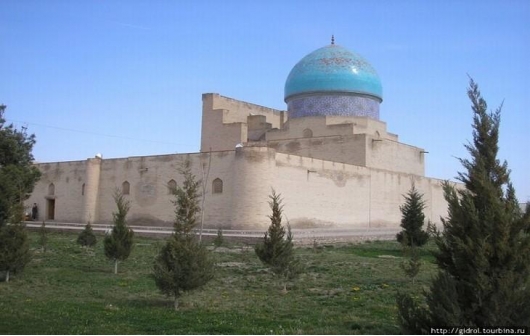