Gulistan is the smallest regional center in Uzbekistan (77,000 inhabitants), located just 120 kilometers from Tashkent. The name is frequently used from Transcaucasia to Pakistan and translating from Persian means Blooming territory. The tiny Syrdarya region occupies now an area literally transformed by the twentieth century and hardly anyone regrets the disappearance of the Hungry Steppe.

Today’s Syrdarya region of Uzbekistan, the second smallest from the end by area (after Andijan) and the smallest by population (770 thousand people) is a kind of parody of its namesake that used to be in the Russian Empire: in size they differ 99 times (5.1 thousand square kilometers against 504 thousand), moreover they don’t even overlap territorially. "Tsarist" Syrdarya region with the center in Tashkent on the territory of the future Uzbekistan occupied only the right bank of the Syr Darya to the slopes of the Tien Shan ... and most of Karakalpakstan and Navoi region, the Kyzylkum desert between the territories of Khiva and Bukhara. Basically, it included the vast expanses of Southern Kazakhstan from the Aral Sea to the Chui Valley, including Perovsk (Kyzylorda), Turkestan, Chimkent, Aulie-Ata (Taraz) and even Talas in Kyrgyzstan, which was then only a village: under Soviet Union it fell apart to 6 regions of three countries.

The territory of the present day "small" Syr Darya region on the left bank of the great river used to be the part of Khojent district of the Samarkand region. The Syr Darya river that can be compared in status with the Don and Yaik (Ural) River (2,219 km long, 703 m3 / s water flow) runs through the territory of Uzbekistan, with the exception of the Fergana Valley, only a few tens of kilometers on a narrow bottleneck between Kazakhstan and Tajikistan. View of the river from the train: 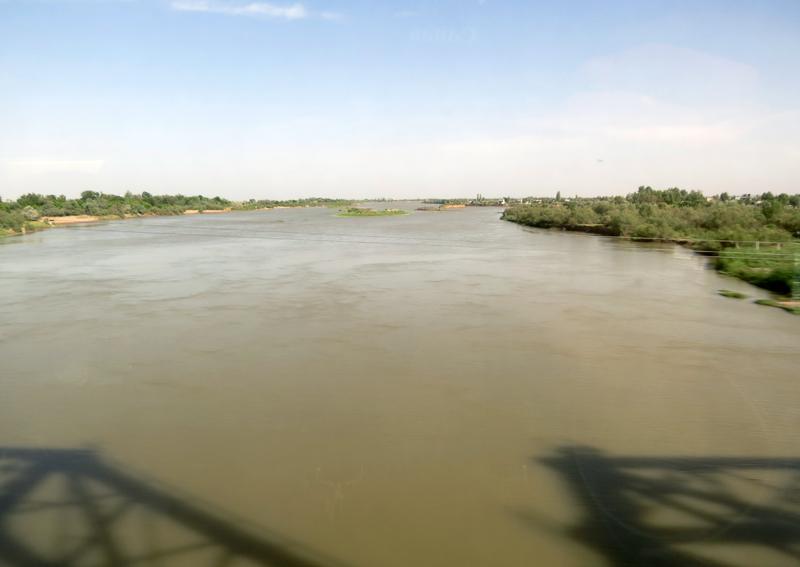 Since the dawn of time there used to be the Hungry Steppe on the left bank of the river - in principle, it is not a proper name, so they called territories in the Turkestan between the oases, but this exact one, known by locals as Mirzachul, was probably the most "hungry", dividing on the ancient trade routes Shash (where Tashkent) and Sogdiana (where Samarkand and Bukhara). Just a hundred years ago there still stood giant sardobas (covered reservoir wells) in the desert sands at a distance of one daily crossing on the way to Malik, Mirza-Rabat and Akchety, built according to legend by Timur himself. 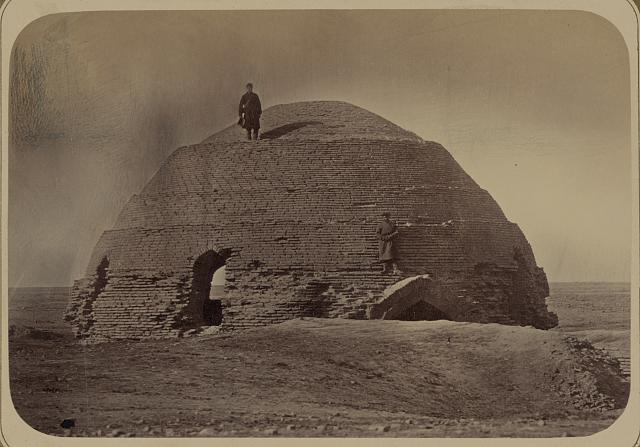 However, it is difficult to imagine now this kind of picture – all the way from Tashkent to Samarkand one can see green fields, large villages, canals and busy roads... Surprisingly, the soils of Hungry Steppe remained quite fertile, the ratio of rainfall and sunny days was nearly the same as in fertile Fergana and Hissar valleys, and in the spring when the snow melted, it blossomed and turned green: what was making it ‘hungry’ was lacking constant fresh water. Under Russia, from the first decades began to appear projects of its melioration, which started to be implemented at a rapid pace at the turn of the 19-20th centuries by the aristocrat-adventurer Nikolai Iskander. Grand Duke Nikolai Konstantinovich, nephew of Alexander II, an officer and geographer who first came to Turkestan during Khiva campaign, and the second time - exiled with the deprivation of all his titles and inheritance for the theft of diamonds from the family collection, Iskander (this name, subsequently official, he took himself in Tashkent) was a pretty daredevil, and as often happened in those days, the exile transformed his energy to a peaceful projects. He built a lot in Tashkent, collected a huge collection of arts, but his main contribution to the development of Turkestan was the construction in the years 1872-95 by "indigenous way" of the canal named after Nicholas I. It was 84 km long, and the first Russian settlements appeared along the channel: Romanovsky, Zaporozhye, Nadezhdinsky, Nikolayevsky, Nizhnevolynsky, Verkhnevolynsky and Konnogvardeysky. Nikolai Konstantinovich seemed to create his own principality in the empty land, and on the bank of the Syr Darya appeared his palace, which even was captured by Prokudin-Gorsky. 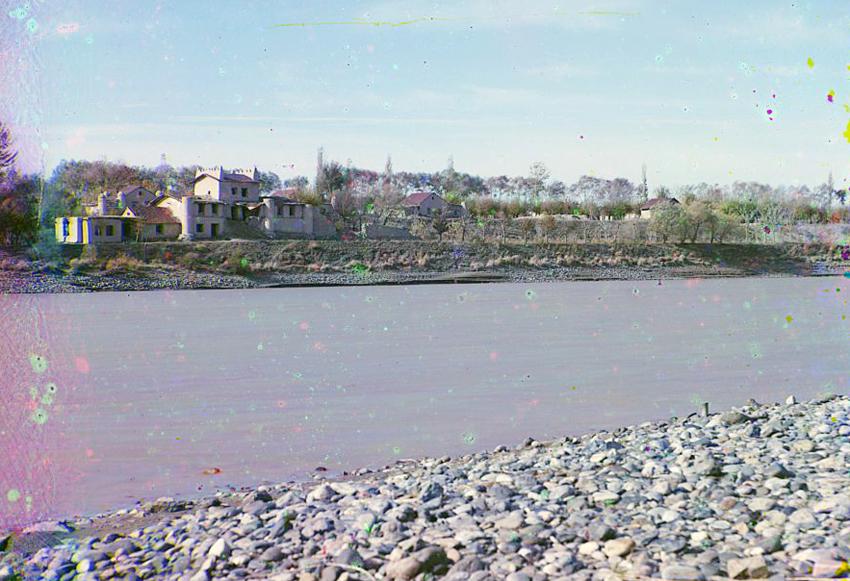 However, state capital and engineering were still more reliable: in 1907-13 the Romanov Canal, 113 km long, was built. Under the Soviets it was renamed to Kirov channel and now is called the Dostyk Canal ("Friendship"), since it connects Uzbekistan with Kazakhstan. It also includes the channel of Nicholas I, which became one of its main branches. 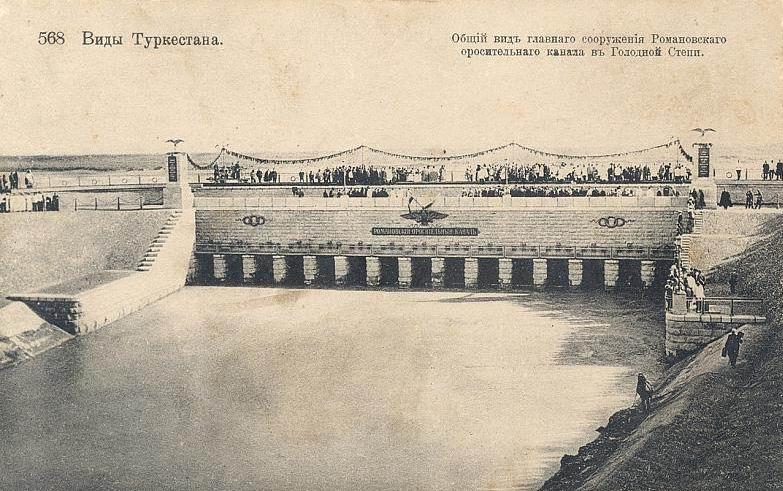 The final conquest of the Hungry Steppe was realized by the Soviet construction of the 1950s and 1960s: the creation of an melioration system that allocated brackish groundwater, the expansion of the Kirov Canal, the construction of several more canals and reservoirs, the discharge of flood waters onto the Aransai lowland, which turned into a huge Aydarkul Lake, and, of course, the appearance of dozens of state farms, where Russians, Koreans and even Uzbeks came together - after all before all that the Hungry Steppe was rather a Kazakh camping-ground.

There were several small Uzbek villages in Hungry Steppe one of which was Achchikuduk (translated as Bitter Well), where in 1895 the Nicholas I Channel met the Samarkand-Tashkent railway and where the Griboedovka station was opened. The settlement grew in size, absorbed nearby villages and in 1922 it was reamed to Mirzachchul. In 1959, Mirzachchul became Gulistan. All this time it was the part of Samarkand region, but in 1963 suddenly received the status of the city and couple of months later the regional centre of newly established Syrdarya region. This tiny region is in fact very strategic: at the Tajik border in the city of Shirin there is Farhadskaya HPP (1942-48) that feeds all the channels with water and there is Syrdarya GRES (1966-81) that produce the third of all the electricity in Uzbekistan and also famous for the third highest in the post-Soviet countries (after the GRP in Ekibastuz and the Russian Sharypovo) 350-meter pipe.

Gulistan is located slightly away from Samarkand-Tashkent highway but still the heart of the city is a railway station connecting it with all the major cities of Uzbekistan. The area around station is bustling with life, shops trading with everything one might think of, next to the station is a bus station with marshrutkas (small buses) running towards the nearby villages and a huge recently built mosque. 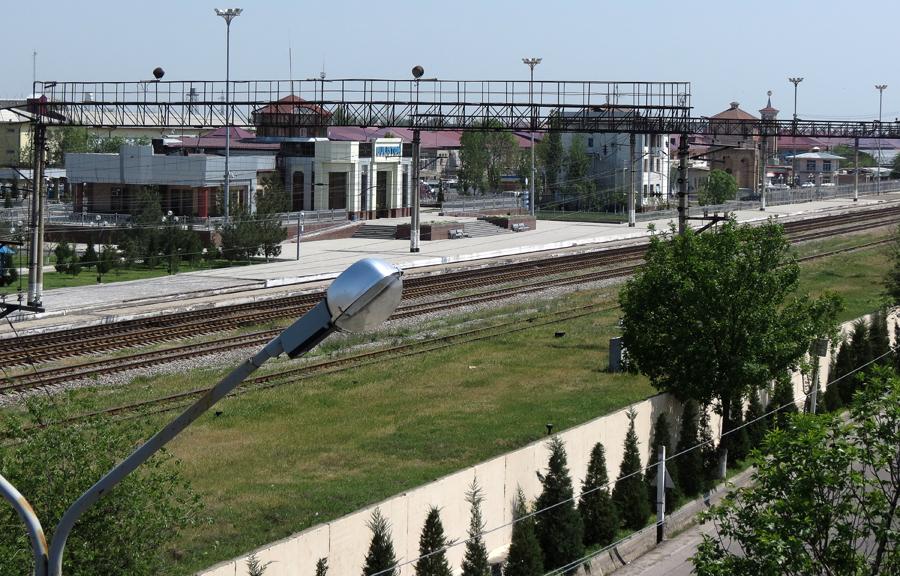 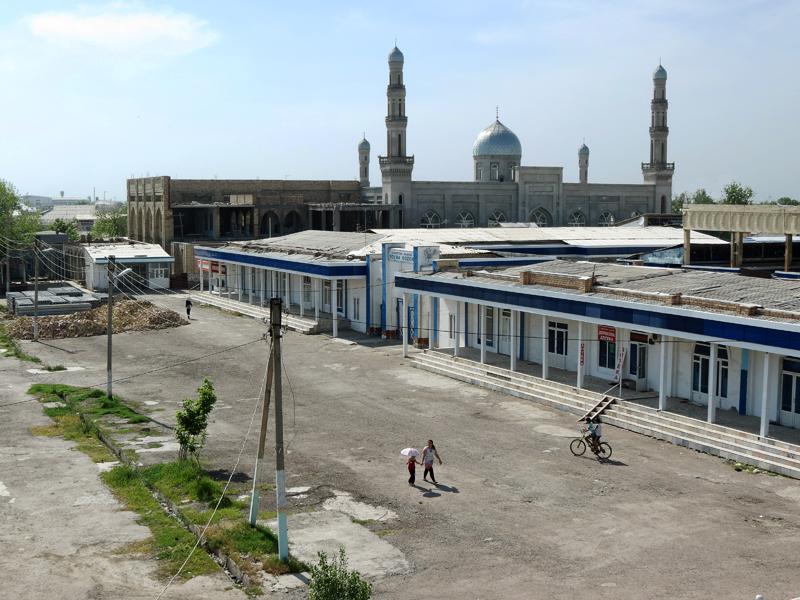 Gulistan practically has not any landmarks worth visiting for the foreign tourists. Architecture is bleak and apart from several buildings of tsarist Russia and soviet times there is not much to see.

Perhaps the most unusual building of Gulistan is St. Nicholas Church (1955-57, founded in 1945). Churches are not rare in Uzbekistan but what makes it standing out is that firstly it was built during the times of Soviet Union – not the rarest fact as well – there were many churches of Soviet construction, but, secondly, because most of those churches were later expanded and decorated in the post-Soviet period, whiles the church in Gulistan preserved its original appearance of Stalin period, the clear example of an Orthodox Soviet architecture. 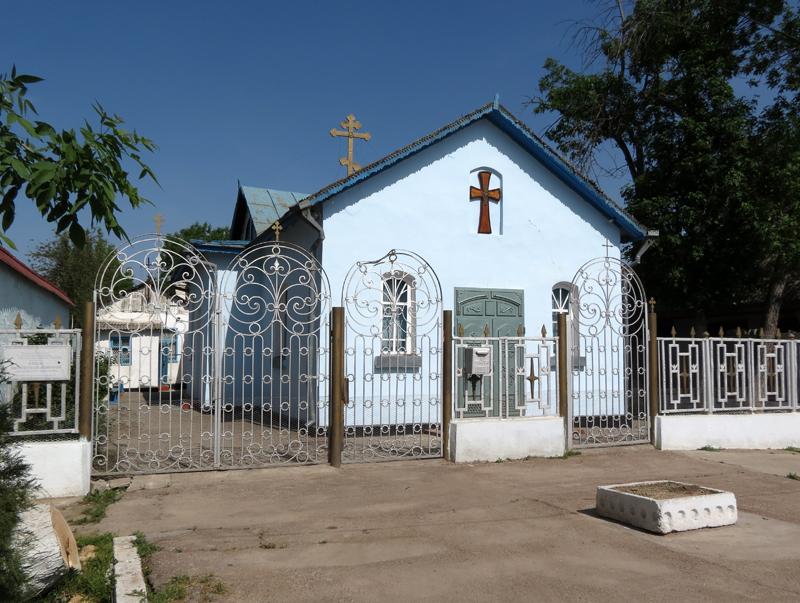 Gulistan was transformed from the village into a regional center at Khrushchov times (50-60s), that's why the main buildings here reflect those times, very typical for the Soviet Union, even without Central Asian "touch".

There is a disproportionately large theater for such a small town - Syrdarya Regional Music and Drama Theater named after Khodjaev, built in 1970s-1980s. This is one of the most impressive theatrical buildings of the late USSR. 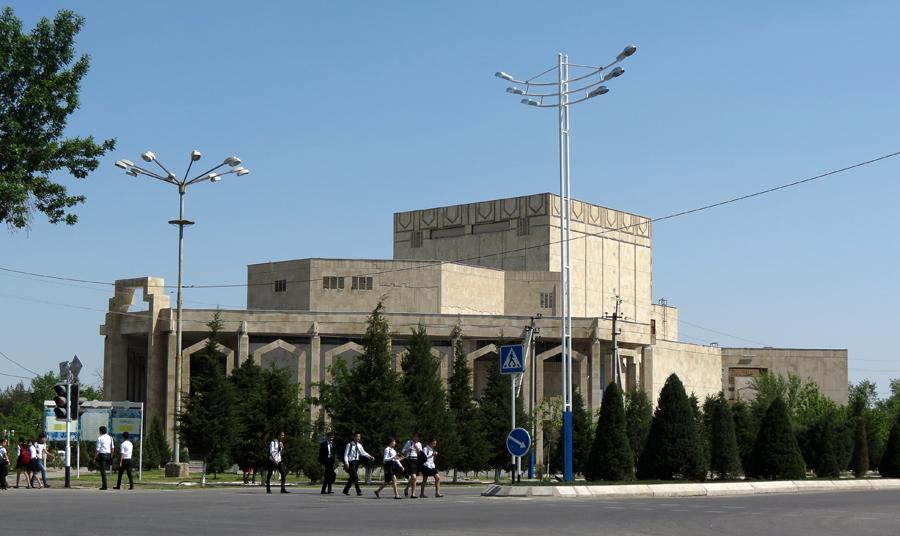 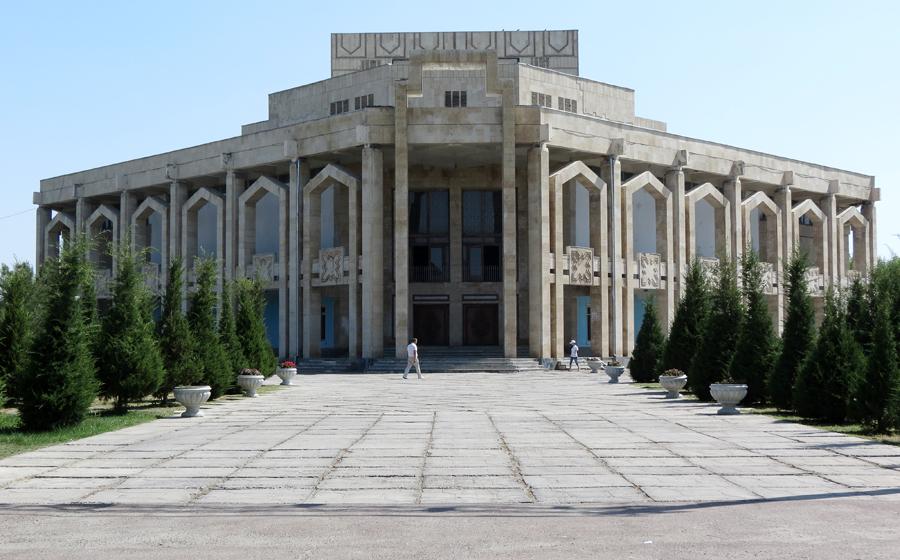 Opposite the theater is the monument to Alisher Navoi 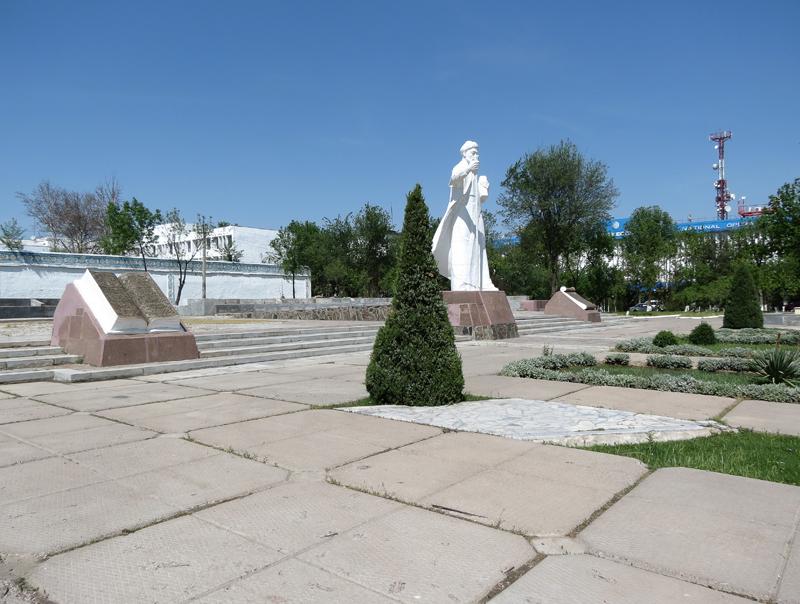 The theater and the Navoi monument open is the starting point to explore the Gulistan center itself between Uzbekistan and Independence (Mustakillik) streets that run parallel to railways. Going straight you will enter the town’s main square with the obligatory bird Humo: 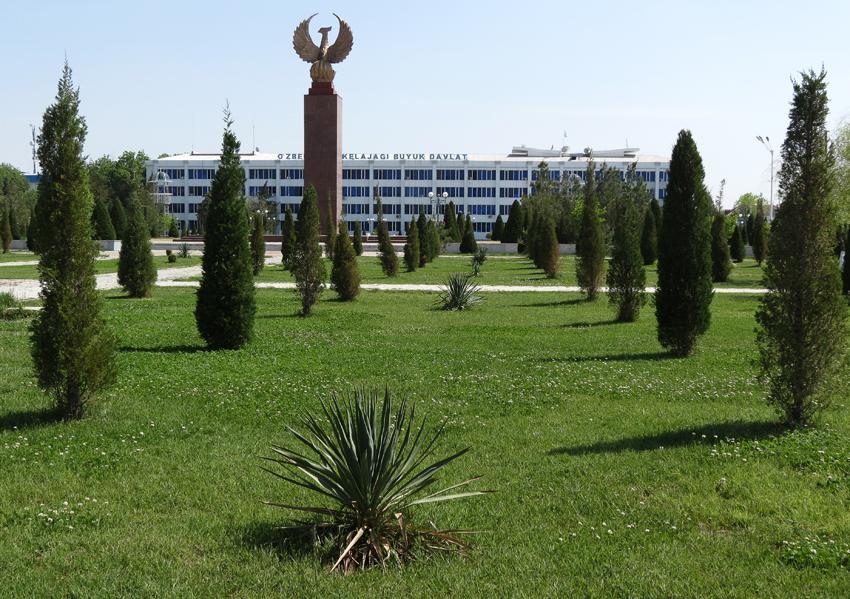 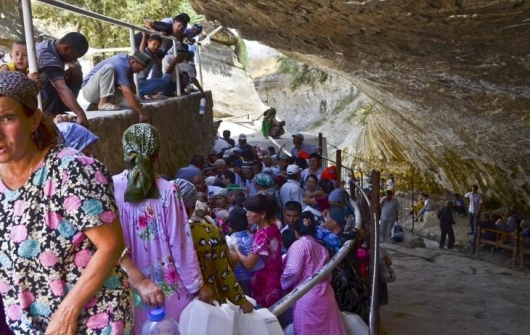 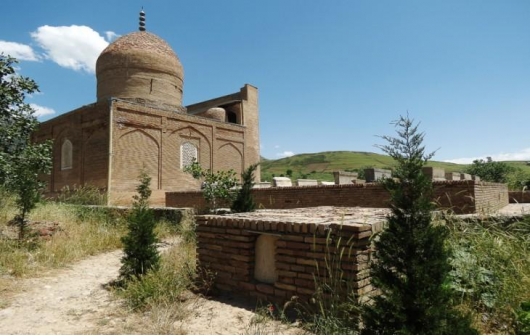 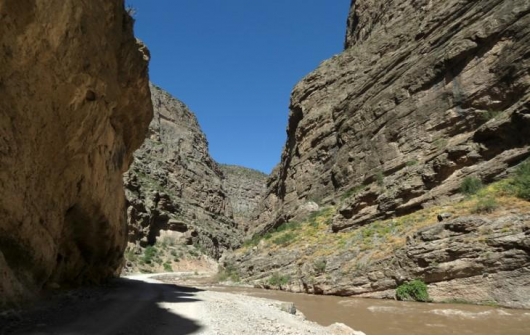 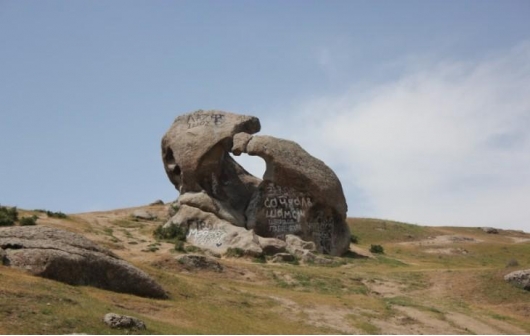 Teshik Tash
Boysun
Not far from Baysun in the pass of Sari-Shoto there is a holy place worshipped by all Uzbek people: Teshik-Tash. A large Holed Stone (Teshik-Tash in Turkic) is surrounded by small white stones. For millennia, the nature has ground the stone, creating a marvel of nature.