Mizdakhan necropolis, ancient cemetery, located next to the remains of the Gyaur-Kala fortress, is one of the oldest and most visited pilgrimage sites of Karakalpakstan. The fortress received its name during the Arab conquest, and means “a fortress of disbelievers”, as scientists found that the inhabitants of the fortress used to be Zoroastrians before the Arab conquest.

Mizdakhan arose near the city of the fire-worshipers in around II-IV centuries BC, then it turned into one of the most revered Muslim shrines of Central Asia. The name of the city of Khojali, located on the bank of the Amudarya near the capital of Karakalpakstan - Nukus, means "the land of pilgrims". Necropolis of Mizdakhan (IV century BC - XIV century AD) is a huge complex of age-diverse antiquities and includes one of the most ancient cemeteries in Central Asia.

During the Middle Ages, Mizdahkan was the third largest city of Khorezm. Here, the traditions of Zoroastrianism and Islam intertwined: old burials, the ruins of medieval mausoleums, the withering ruins of the oldest buildings, from which only the very top is visible, the greater part of them is hidden under layers of time and sand. Here, unique finds were made related to ancient funeral rites (ossuary vessels, sarcophagi, ceramics, coins) that made possible for archaeologists to recreate the details of the dominant culture.

The whole complex of monuments is located on three hills 3-4 km south of the city Khodjeyli in Karakalpakstan. How Mizdakhan became a place of pilgrimage for Muslims? Most likely, Gyaur Kala appeared first. The emergence of the settlement dates back to the 4th century BC. At the first view on the fortress, the power of its ten meters thick walls makes a strong impression, its remnants continue to protect the ruins of the two city citadels, one of which, as believed by archeologists, used to be a construction at the palace, and another one - the Temple of Fire.

The other hill, opposite the fortress, was originally a place for there Zoroastrian cemetery where residents of the fortress buried their dead. This is evidenced by the ossuaries (vessels for burial) discovered by archaeologists, as well as something like dakhma - a tower with a flat roof, where Zoroastrians would leave their dead. Birds chews their bones, and relatives collected the bones and piled in ossuaries.

In the 8th century, after the capture of the fortress by the Arabs, the religion of Zoroastrianism was destroyed in all the open spaces of Central Asia, and the dead were buried according to Muslim rites. Legend has it that Adam's grave is located in the Mizdakhan, this is what contributed to the fact that the necropolis was turned into a holy place. Also, a mausoleum that was erected over Adam's imaginary grave has a special religious meaning. This so-called 'Apocalypse Clocks' and hourglass. Each year a brick falls from the walls of a building, according to legend, when the last brick falls, the end of the world will begin, so the pilgrims try to put the bricks back in construction, believing that God hears their prayers and save them.

A large number of legends are associated with this necropolis.

The Legend of Love

At the top of the eastern hill is the mausoleum of Mazlumkhon-sulu, dating back to the 14th century.

This amazing structure stands above the surface of the earth with only a round dome and entrance portal. A narrow stone staircase leads deep into the ground into the vast cross-shaped hall. It is cool here even in the daytime heat of fifty degrees and light from the dome windows is poured onto the mosaic walls with blue streams.

According to the legend, the beautiful Mazlumkhon was the daughter of the ruler and her love was sought by the most notable and rich. But she loved a simple architect who could not expect to marry a princess. Angered by the fact that his daughter rejects all the suitors in a row, the ruler announced that he would give her to marry someone who, overnight, would build a tower that was as high as the sky. The enamored architect, inspired by luck, fulfilled this condition. But, of course, still did not get the consent of his father. Then in grief he rushed down from the minaret he had built himself. And princess followed his fate.

The governor, of course, repented, and ordered to bury young lovers together and erect a mausoleum over their grave made of bricks of a minaret, which he desperately ordered to destroy and turn deep into the earth.

The Riddle of Shamun Nabi 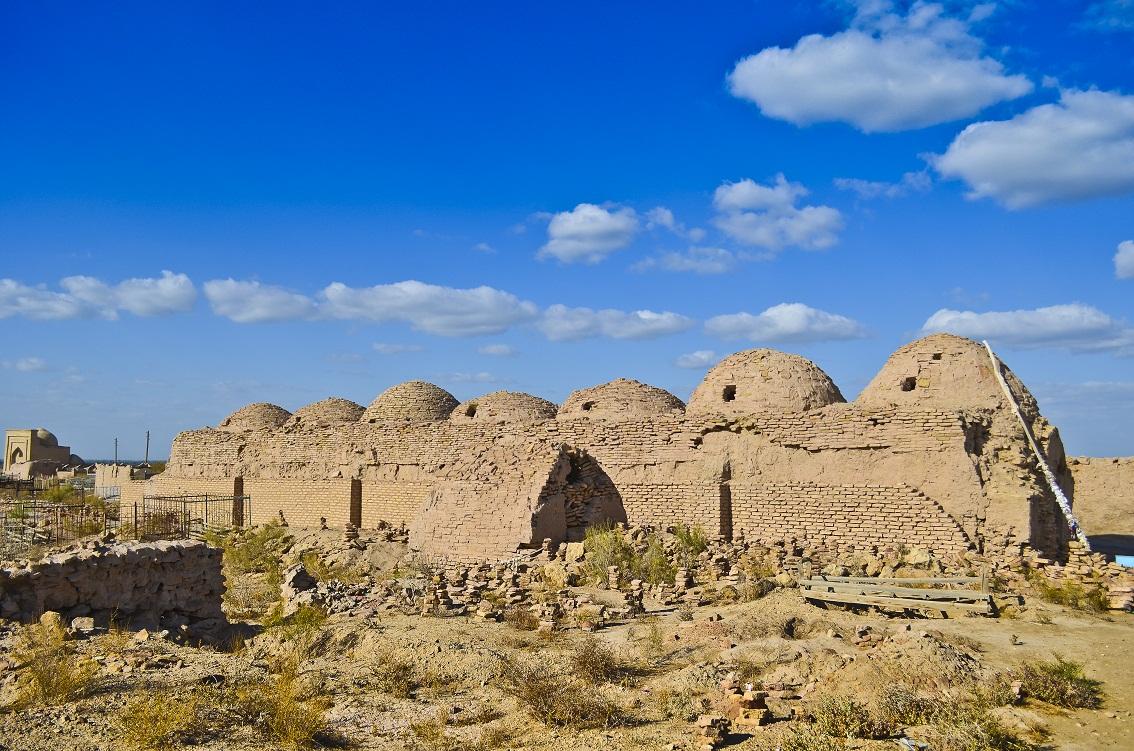 According to the stories of the local shiikishi - the keepers of eternity, this mysterious preacher arrived to the land of Khorezm even before the messengers of the Prophet Muhammad, and called on people to believe in the One God. Prior to his arrival, residents of these places were not Muslims. He arrived here but concealed his true intentions. There was a reason for that since those who arrived before him to these places - Yahya and Zakaria (missionaries) -were preaching openly but were seized and thrown into the zindan (dungeon). Shamun Nabi first settled as a janitor and then slowly advanced to the treasurer of the state. Learning about the place of confinement of Yahya and Zakaria, he sought their release, explaining that they were both prophets and could be useful to the sovereign Gaour. The latter agreed to their release on the condition that they could prove that they really are prophets. To do this, he suggested them to revive the dead and restore the vision of his blind daughter. The prophets fulfilled his order and were given freedom. From this moment Shamun Nabi was considered a saint.

Also Shamun (Simon) created many miracles, healed from illnesses, controlled the weather and the movement of heavenly bodies, could speak the language of wild animals. In addition, he was a fearless warrior and hero, who did not fear, on the basis of faith, to challenge the local tsar, whom tradition calls Gaour - the infidel.

Local shiikshs call the ruins of the mausoleum of St. Erezhep (Rajab) an Apocalypse Clocks. St. Erezhep was  preaching Islam at the dawn of its spread in Central Asia.

There is another legend about Khalifa Erezhep that he taught his subjects during his lifetime for 40 years, and after his death his spirit continued his work. This is a very high rectangular structure of the 9th century, one wall and roof of which has already completely collapsed. According to legends, every year one brick falls down from the building and when the last one falls the end of the world will come. According to archaeologists, the building has a fairly solid foundation, which was based on the reed layer, protecting from dampness and giving seismic stability. If only a third of the building collapsed completely within 12 centuries, then at least two and a half millennia remained until the end of the world. In addition, pilgrims diligently build around it thousands of small pyramids from the ancient stones placed on top of each other.

The number of bricks in the pyramid must be seven, according to the number of the Prophet's companions buried here. It is no coincidence that the number of domes above Shamun's tomb is also seven.

The earth around the mausoleum is full of positive energy, which has been accumulated here for many centuries, thanks to the selfless life of many of those who are buried in this land. It is believed that the pilgrim who has absorbed this energy can spiritually purify himself, be ennobled and fundamentally change his life. 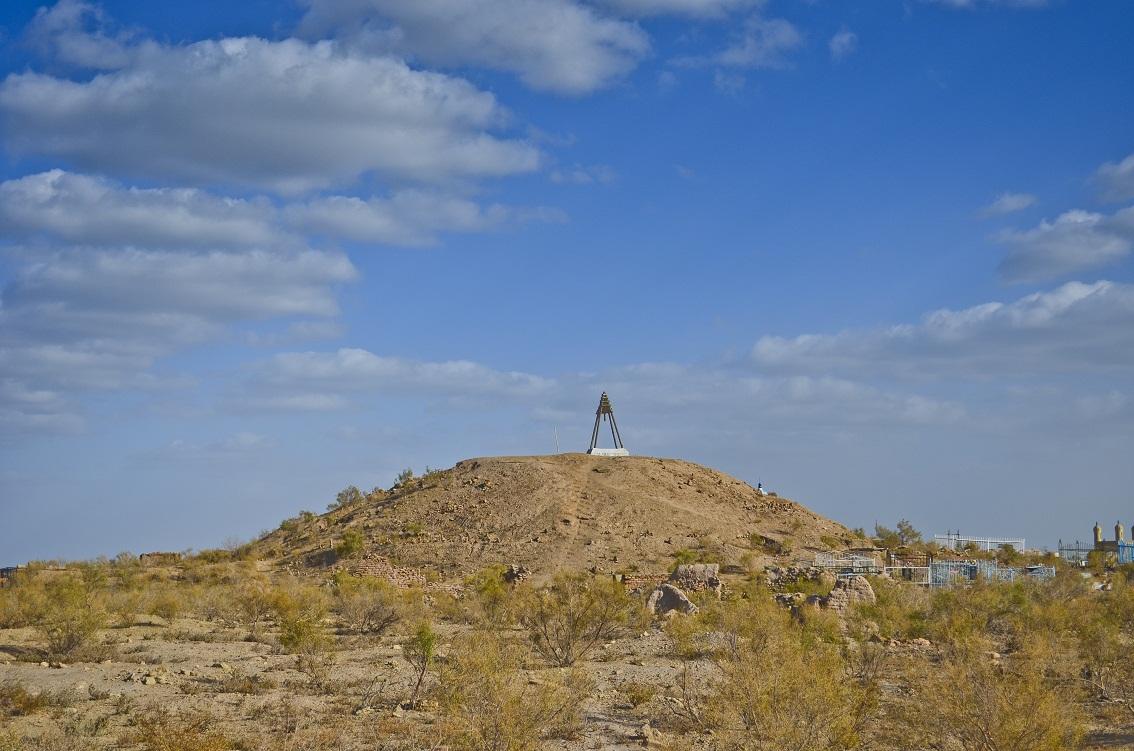 Jumart-Kassab is a mound about 5m high, located near the Shamun-nabi mazar. On its top and slopes it is possible to trace the exits of burnt brick structures, as well as fragments of Khorezm ceramics. This suggests that the mound hides some ancient buildings.

There is a legend is associated with the hill of Jumart-Kassab ("Butcher Jumart") about a good butcher, who was giving poor people meat free of charge during the famine years. For his disinterested kindness and sympathy for his neighbors, he was elevated to the rank of saints.

The mound is the center of zieraat (praying place) of childless women. The ritual at this mazar is performed as follows: pilgrims climb the hill, but first they take permission from the custodians of the mazar. They walk around the sagan, touching it with their hands, after which they roll down from the mountain seven times.

Sudochie Lake tour
Nukus – Kungrad – Usturt Plateau – Sudochie Lake – Nukus (600 km – 8 hrs)
$200 1 days
View details
Day tour to Sudochie Lakes - stop at one of the most ecologically intact zones of the Amudariya river delta and a key location for the preservation and maintenance of the biodiversity of the region. The lakes support many breeding waterbird species including rare and disappearing species, all using the Western-Asian migratory route.
Popular hotels in Nukus