Not a lot of people aware of the ruins of fortresses of ancient Khorezm in Karakalpakstan. Most of the tourists visit this region to have a tour to Aral sea, see the ships cemetery and witness one of the most serious man-made ecological disasters. But it is really worth checking the rich historical heritage and learn more about the history of this region that once was one of the busiest and progressive part of the world.

The territory of ancient Khorezm is literally scattered with the ancient qalas ("qala" means fortress) that remained of the border towns of the state of Khorezm, which were built to protect against nomadic raids. Most of them served their purpose successfully until the XIII century, before the capture of the country by hordes of Genghis Khan. The population of the country was mostly killed or enslaved, towns destroyed, economy ruined and the fortresses were abandoned. During the Soviet times archeologists took the interest in fortresses, partially excavated and cleared them, the most valuable finds were taken to museums and the ruins were left alone again.

Two things are amazing about these places. Fortresses were built practically from the earth, from unburnt raw clay bricks. That is why they look like the sand castles on the beach, with some having only uneven toothed walls left. But just imagine that the oldest fortress is almost 2500 years old! Wars, winds, rains, animals, archeologists - how many things happened to them during all these times, and yet they still stand there. But the effect would not have been the same if the place was transformed, wooden foot paths had been laid in the fortresses, protective ropes stretched and "Do not touch with your hands" warning signs attached. There is nothing of that here. Fortresses have not become museums, they have no security and entrance fees, you can explore them as long and as much as you want - at your own peril and risk, of course. But it is clear that the earth has hardened to the density of stone and the ruins will easily stand another couple of thousands of years.

Another plus is that there are hardly any people visiting these places. You might meet couple of tourists in high seasons but most likely be the only ones. The area is not easily accessible and you can get here only by taxi, so this is in any case not a mass entertainment. You can hire a car at the hotel in Khiva or through the travel agency. Booking through the travel agency will be slightly more expensive but they will get you a knowledgeable guide who would be able to tell you more about the places and their story than an ordinary taxi driver. Hiring a taxi would cost you around ($50-80 depending on the duration). Better agree beforehand how many fortresses you would want to see as most of the drivers only show the three main fortresses missing all others. The best time to visit is April-May and September-October when it is not unbearably hot (in summer) or cold (in winter).

The nature of Karakalpakstan is quite diverse, within half an hour of driving green meadows and lakes can turn into dunes. In May the green scenery and desert flowers views will prevail. The saddest sight is the salt-covered crust and thinned hollows of dried lakes. The influence of the Aral disaster is felt already here.

In principle, you can see all the fortress within half a day and then return back to Khiva. But you can also combine this tour with a stay in "Ayaz-kala" yurt camp and try to live the life of the real nomads. If you want to commune with nature, this will probably satisfy the outdoor adventurer in you and leave unforgettable impression. "Ayaz-kala" is one of the first yurt hotels in Uzbekistan, it was opened in 1998. Yurts, authentic, traditional, were bought by the owners from the Kazakhs - they say that there are no more craftsmen left in Uzbekistan. The water is brought here in cisterns, the electricity from solar panels, but the level of comfort for the desert is quite decent - there is a real toilet and a shower with hot water in a separate house. Sleeping, of course, on the floor, on mattresses. But the sleep in a yurt is revitalizing, felt passes air, but regulates the temperature, so it's neither hot nor cold. The food here is as good as in the rest of Uzbekistan, simple and generous, dinner is served in the "festive" yurt. In addition to visiting the fortresses, there is another entertainment - you can have a camel ride that are bred here as livestock. The night sky is clear and you can see myriads of stars, the Milky Way and listen to the sounds of desert. 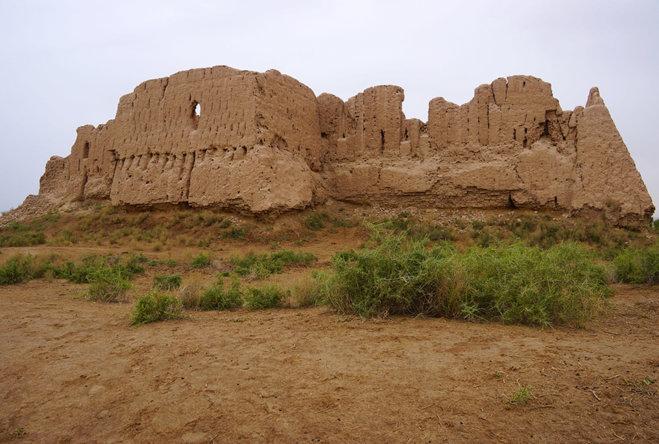 The closest to Khiva is Kyzyl-kala fortress, I century AD, small, but well preserved 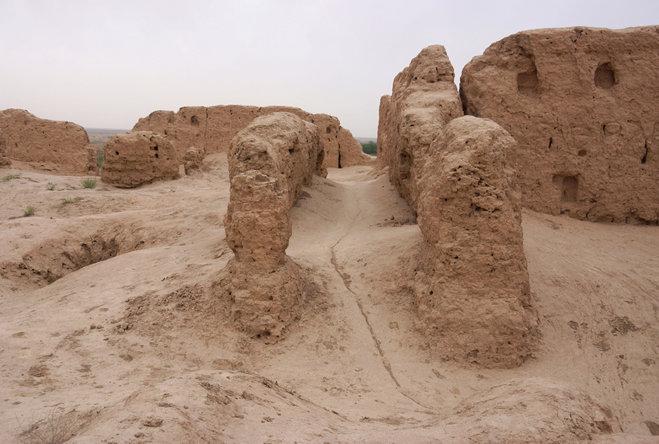 Ayaz-kala, consisting of three parts, is one of the most spectacular fortresses. Perfectly preserved walls with two-tiered galleries and towers with loopholes 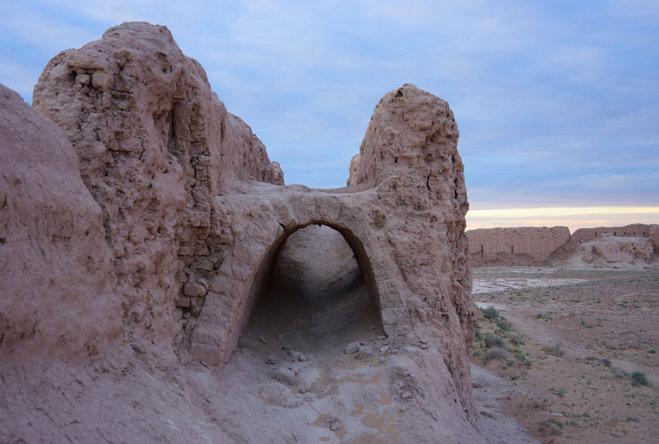 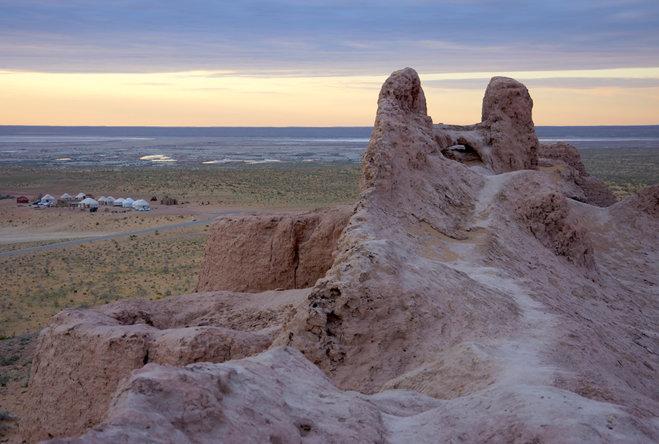 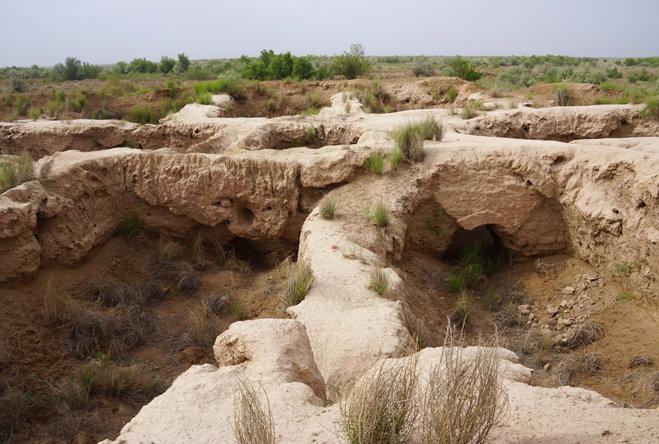 Koi-Krylgan-kala is not very impressive, but it is probably one of the most interesting monuments of ancient Khorezm. Round in shape, with a complex system of labyrinths, it was built in the IV-III centuries BC, and was used not as a fortress, but as a tomb of the Khwarezmian kings and as a Zoroastrian temple 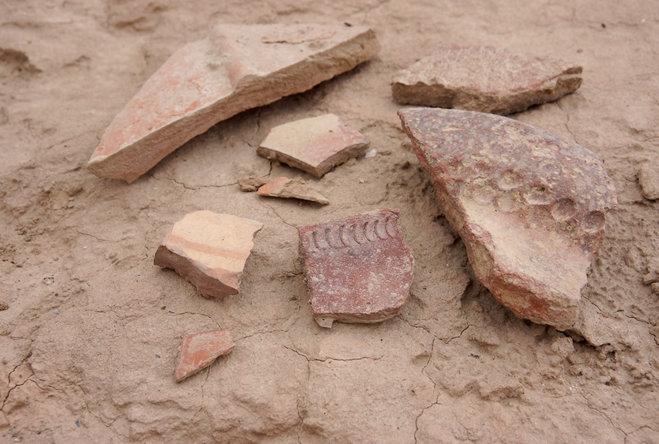 Presumably, there was a ceramic production, therefore smithereens are found here in numbers. It's hard to believe that exhibits of 2000 years old are just lying under your feet 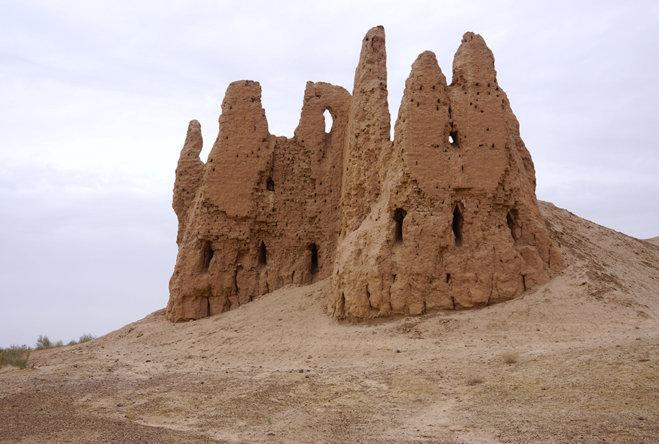 Kirk-kiz kala still has not lost the shape of an even quadrangle, but only walls are well preserved 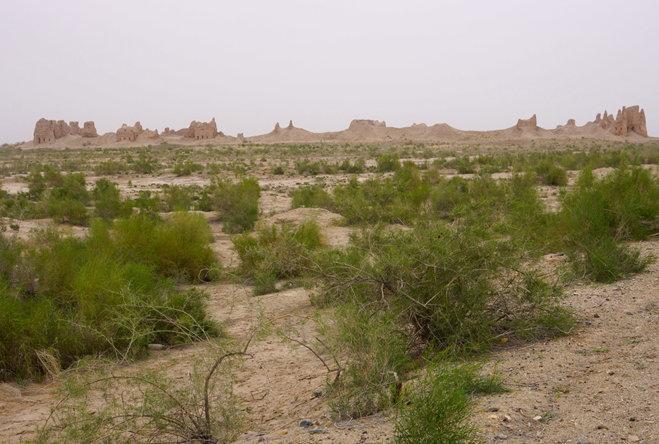 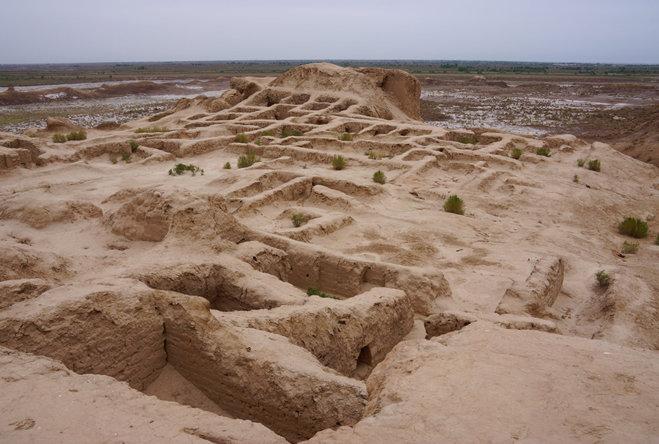 Toprak-kala is not just a fortress, but a city: in the III century it was the capital of Khorezm. In the far corner rooms are visible, these are the remains of the palace of the ruler

Kyzyl Kum desert in May

Yurt Camp & Aydarkul Lake Tour
Bukhara/Samarkand – Nurata – Yurt Camp – Bukhara/Samarkand
2 days
View details
Explore the ancient sights from the time of Alexander Great in Nurata city. Stay in the Yurt camp and explore the desert landscape walking around the dunes or riding on the camels.
Popular hotels in Karakalpakstan 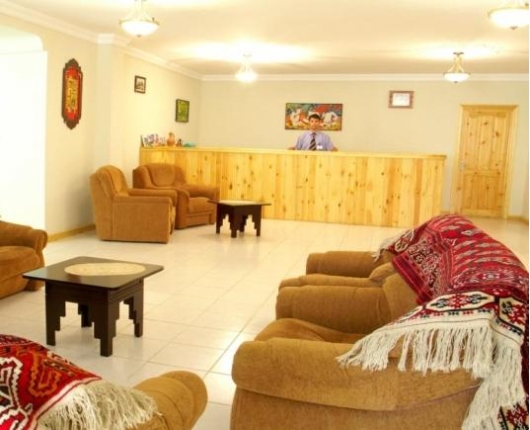 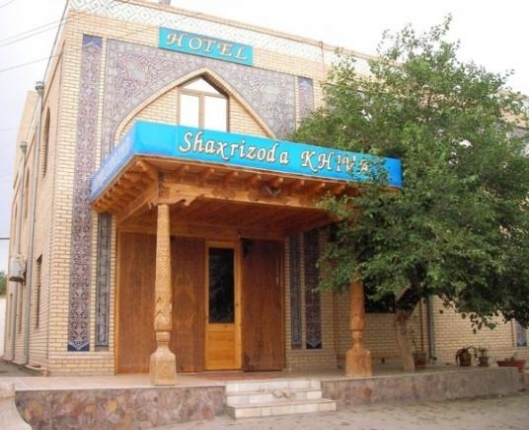 Recommended
Shaherezada Khiva hotel
Khiva
View details
A lovely family run hotel just inside the city walls and great location to explore this fabulous city of Khiva. Rooms are nice, breakfast is great, staff is very friendly and accommodating, location is very good. It is a family run place and is well worth the stay.
Room facilities