Nurata is a stones throw from the Kyzylkum Desert. Named after its red sand, it is the 11th-largest desert in the world and spreads across northern Uzbekistan and up into neighbouring Kazakhstan. Between March and May, and September/October, you can trek on foot or by camel from the village of Yangi Kazgan, just north of Lake Aidarkul, and camel treks of two days or more include accommodation in the camel hair yurts belonging to local Kazakh nomads. Expect to enjoy the best of local hospitality, from homemade bread dipped in still-steaming camel milk, to hunks of camel meat. Beds are made up on the floor from piles of rainbow-coloured blankets and rugs, and you'll often sleep cheek-by-jowl with other guests. You'll never forget the experience, and certainly won't get cold at night. You can arrange camel trekking through Eurasia.travel or, alternatively, approach the camel camps directly.

There are four yurt camps within shooting distance to the north of Nurata. Two are about 60km due north of Nurata in Yangikazgan; two others are further east in Dungalok near the shores of manmade Lake Aidarkul, formed from the diverted waters of the Syr-Darya in 1969.

Camel farms to the north of Nurata supply the mounts for anyone wishing to experience desert life in proper Silk Road style, aboard the stubborn and enigmatic ships of the desert. Kazakh families dominate the pasturelands of the Kyzyl Kum, Unlike the Uzbeks, they remained nomads into the 20th century and, despite Stalin's enforced collectivization in the 1930s, many traditions survive. Kazakh yurts, round felt tents set on a wooden framework, stand next to modern shacks and are preferred for summer use. However drab the exterior, inside you will often find a blaze of colourful scarves, blankets and embroideries. Guests are quickly made welcome with a refreshing bowl of koumiss, fermented mare's milk.

All yurt camps include short camel trekking rides in their rates; the ones in Dungalok offer fishing. Longer treks, including multiple-day excursions, are also possible for an extra charge. Don't expect to get too fond of your mount; camels are surprisingly hard creatures to love when you get up close and personal. Wet wipes will undoubtedly come in handy.

The comfortable camel-hair yurts, most of them tastefully decorated with carpets and suzani, sleep six to eight people. Prices vary from camp to camp according to the level of comfort. Camps close from November to mid-March, and sometimes during July and August. Showing up unannounced may work, but as they are often booked by tour groups you’re best off booking ahead.

Central Asia's sharply continental climate is at its most extreme in the desert, with bitter winters and summer air temperatures over 45°C. Timing is of paramount importance: March to May and September to October are best for trekking, particularly spring after the first rains have fallen to carpet the plains in poppies and tulips.

The Central Asian tortoise is only active for the three spring months and hibernates once the ephemeral plants have withered away. Birds, lizards and beetles busy about the sands, disappearing at the first sign of the devastating hot winds, garmsil, that sweep up from the south engulfing land, sky and travellers through the ages in terrible sandstorms. Most itineraries offer a range of scenery, from flat wastes to rolling barkhan sand hills.

Leaving Nurata there are the ancient karyz wells, a system of irrigation from Alexander the Great's time. Camping is in Kazakh yurts (US$30-45 per person), wherever water can be found. Most travel agencies can arrange a camel or horse trek, often based from Yangi Kazgan village, north of Naratau, or Baimurat, 3 kilometres north of Aidarkul Lake, the favourite destination for trekkers to swim off the dust of the saddle and fish for a welcome change of diet. The yurt camps on Aidarkul have been upgraded and access roads improved. For over 200 kilometres the lake stretches through the desert within sight of the Nuratin mountains. Once the winter ice has melted, it becomes a breeding site for migrating birds and one of the best birdwatching sites in the country. Euphrates poplars and pink tamarisk bushes bend under the weight of cormorant nests heavy with young. Islands on the lake take their name from the cackling colonies of pelicans, gulls, terns and herons that gather at this remote sanctuary.

Sputnik Camel Camp - The first and probably the fanciest of the lot, run by the mischievous, tough-as-nails Radik. Has attractive dining yurt and lots of creature comforts.

Yangikazgan Yurt Camp - Also has electricity and creature comforts, but dining is in a cement building. It’s quite close to Sputnik, in the middle of the desert 6km north of Yangikazgan.

Safari Camp - Associated with the provincial tourism office in Navoi.

Yurt Camp & Aydarkul Lake Tour
Bukhara/Samarkand – Nurata – Yurt Camp – Bukhara/Samarkand
2 days
View details
Explore the ancient sights from the time of Alexander Great in Nurata city. Stay in the Yurt camp and explore the desert landscape walking around the dunes or riding on the camels.
Popular hotels in Nurata 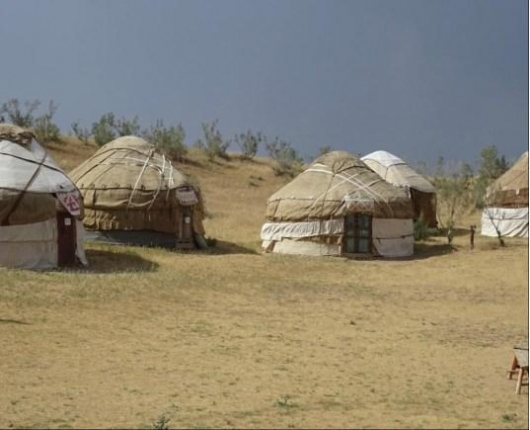 Safari yurt camp
Nurata
View details
Safari yurt camp is located 60 km from Nurata and consists of 20 yurts. The location leaves much to be desired. There’s not much to see out here except nondescript desert and a reservoir. The camp exists purely for the camel rides.
Room facilities 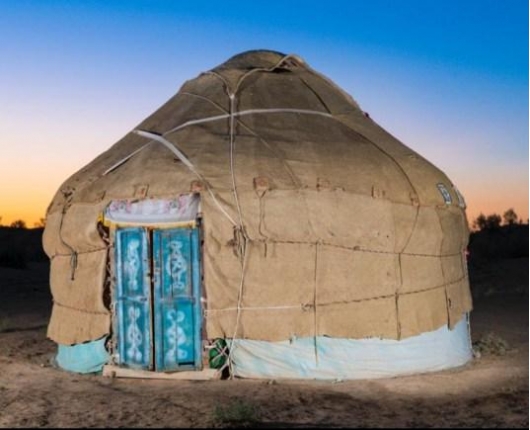