Recommended
Tell friends about Turkmenistan: off the beaten track
Back to tours list

Turkmenistan is, without doubt, the least known of the Stans and probably the world's most bizarre country. Long touted as ‘North Korea with oil’, this Central Asian country sees five times fewer visitors each year than Kim Jong Un’s secretive nation, but that’s all the more reason to visit Turkmenistan. Sandwiched strategically, somewhat precariously, between Iran and Afghanistan, this state will amaze you with for a few wild travel moments. Being well off the tourist trail, you’ll find genuinely curious people, proud to let you in on their fascinating history and traditions, and ply you with the best things in life.

Our representative will meet you at Ashgabat International airport. Transfer to hotel. Free time.

Later drive to visit Nissa fortress -the Sanctuary of Parthian Kings. The fortress was enrolled to UNESCO World Heritage list in 2007. Nissa described as one of the first capitals of the Parthians. It was founded by Arsaces I and was the royal necropolis of the Parthian Kings. Drive to visit Turkmenbashy Ruhy mosque (the largest mosque in Central Asia), After drive to see Presidential Palace, Ruhyyet Palace, Wedding Palace, modern “Yildyz” Hotel, building of Constitution, Arch of Neutrality, Monument and park of Independence, Ferries Wheel, Ertogrul Gazy mosque (blue mosque in Ashgabat), Ashgabat 2017 Asian Games facilities. Transfer to hotel. Overnight in Ashgabat.

BF at Hotel. In the morning drive to Gokdepe fortress that was attacked in December 1880 by Russian Empire Army. The siege of Gokdepe lasted 23 days, after which the city was taken by storm. Visit Geokdepe Mosque (Saparmyrat Hajy) that was built in 1995 to commemorate the defeat and is noted for its mint-turquoise blue colored roof and white marble structure. Also visit Gokdepe Historical Museum to learn the history of Gokdepe, understand the reason of Russian attacks, see the drawings of Russian-Turkmen battle, and see socio-historical development of Turkmen people.

Then drive to Kowata to see underground lake. The Turkmen name Kow-Ata means “father of caves”. This underground area seems like a magnificent auditorium: the overall length of the cave is 230 m, its height reaches 20 m, and its width is at some points 57 m. The bottom of the cave is covered with lumps of dissolved limestone (stalagmites), and its warm and gushing water is clear and emerald colored. The water has a constant temperature of 33-37°C. (You may swim in the lake).

Then drive to Nohur mountain village. Visually, Nohur is unlike any other site found in Turkmenistan. Rich in history, nature and tribal custom, Nohur is set 1,100 m above the Karakum Desert in the cool mountain valleys of southwestern Turkmenistan. The Nohur people have maintained a highly homogeneous society based upon ancestral rights, and tribal custom. The Nohur felts are also thought to be exclusive to this region. They differ from customary Turkmen felts with their original designs and Zoroastrian ornaments. Constructing their homes from the stones found around the area, the Nohur people have decorated these simple homes with handcrafted wooden columns and capitals unique only to this clan of people. Accented by two small flowing streams, the flora and fauna of this region is exceptional. There are mountain goats (umga and marhur), Urial mountain sheep, wolves, foxes, jackals, porcupines, and even snow jaguar. See this ancient way of life uniquely preserved and rarely seen. Dinner at homestay. Overnight at homestay.

BF at homestay. In the morning drive to Karakala. The Syunt-Khasardag nature reserve includes ecosystems of the Western Kopetdag mountains (dry subtropics) and neighboring plains. Here, 37 species of mammals and 217 species of birds are found. Flora of the Western Kopetdag includes 1,266 species of higher plants, which belong to 233 genera and 500 families; among these, 150 species are endemic. The nature reserve incorporates one mountain natural preserve, the Syunt-Khasardag (established in 1990).

Lunch and dinner on site. Overnight in the camp.

Picnic style BF. In the morning drive to Dehistan. Dehistan boasts of its picturesque towers of ancient settlements and 10-12-th century monuments as well as the most ancient mosque up the early Islamic period that stands on ancient entombment of Mashad. This city is probably the most remote and isolated. Once it used to be a prospering medieval city standing on caravan routes between Khoresm and Persian Hyrcania. Then drive to Balkanabat. Overnight at hotel.

BF at Hotel. In the morning drive to Yangykala Canyons. One of the scenic natural objects of Turkmenistan – Yangikala canyons are located in 165 km to the north from Balkanabat city. The word expression “yangy kala” translates from Turkmen as “fire fortress”. Indeed, the sheer cliffs of white, yellow, ocher, purple and red colors, fancily carved by winds and rains, are very similar to the stone castles from a fantasy. Explore the Canyons. Lunch on site. Then drive to Turkmenbashi airport for flight to Ashgabat. Arrival to Ashgabat.

Transfer to Hotel. Overnight at hotel.

BF at Hotel. Free time in the morning.

Afternoon drive to Darwaza burning Gas Crater via Ashgabat. The Crater is also called as “The Door to Hell”. The area is rich in natural gas. While drilling in 1971, Soviet geologists tapped into a cavern filled with natural gas. The ground beneath the drilling rig collapsed, leaving a large hole with a diameter of 60 m and 20 m deep. To avoid poisonous gas discharge, it was decided to burn it off. Geologists had hoped the fire would use all the fuel in a matter of days, but the gas is still burning today. In the evening watch the spectacular and fascinating view of the gas crater. En-route we cross Karakum desert, will stop at small nomad village. Dinner at Gas Crater. Overnight in the camp. 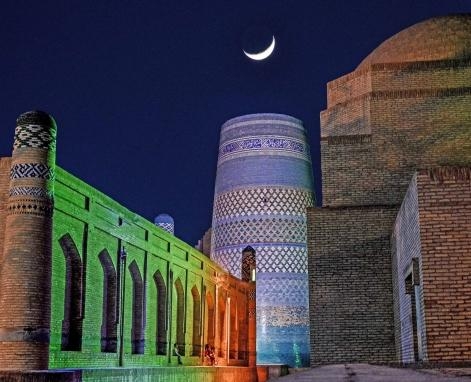