The Khodja Gur Gur Ota Massif, which means "Father of all caves", is located on the Baysuntau ridge. It is a far away edge of inclement and very wild nature. The giant beveled peak of the mountain range ends with a dizzying five-hundred-meter cliff on one side, and deep canyons, cracked plateaus with fossilized dinosaur tracks, basalt breaks and gravel of the most bizarre forms, burial of a saint and a mountain climb  of 3700 m on the other side.

If the spirit of the traveler lives in you and you are ready to accept the challenge, we invite you to one of the most fascinating journeys of your life. The drive to the mountain itself is already an adventure. We will overcome various complicated tracks using off-highway vehicles. Our path will run through the raging mountain rivers, along the steep slopes of mountain forests and alpine meadows. At the end of our drive, we will reach an alpine meadow at an altitude of 2700 m, where we will set up our base camp. You will have a beautiful view of Khoja Gurgurata and the mountain lake Raushan from the place of our camp.

The steep vertical Khoja Gurgurata slope has entrances to many caves.  Many of them even have not been explored yet.

Alongside the summit of the majestic Khodja Gur Gur Ota (3720 m) sits another mountain – Khodja Buz Barak (3920 m). This is the highest point of the Baysuntau ridge, Baysun district. On the way to the top of the mountain from the base camp you will find a path with dizzying cliffs, crossing rocky ledges and cornices; you will bypass the deepest canyons along their edges and traversing false tops and breathtaking views of the surrounding landscapes. Moreover, near the top of the mountain there are traces of a large dinosaur found in the last century; the dinosaur lived here when this peak was only a part of the shore of the ancient sea. This location is not often visited for tourists and if you like to travel and discover something new, we invite you to conquer this glorious mountain.

19:40 – Departure by train Tashkent - Baysun (10 hour trip, can be substituted by Tashkent-Termez flight)

Meeting at the train station, transfer to the guest house, where you can take a shower and get a rest after the train. You will be offered a delicious and eco-friendly breakfast in traditional style. All products are grown by local people in their own fields and gardens with care and love. Honey, nuts and some seasonal fruits are also gathered in the local mountains and slopes of Baysuntau. All meat and dairy products here are also ecologically clean and natural.

Start of the tour:

-     Darband Gorge - “Derbent” or “Darband” is translated from Tajik as “closed door”.  One of the most important caravan routes connecting Sogdiana and India passed through this gorge. Inhabitants of this village were responsible for guarding this route with the historical past being reflected in the name of the gorge.

-     Hojimoy-Ota is one of a sacred places in Surkhandarya and located in the depths of the Derbent gorge. There is a cave that has an underground lake with sacred fish. It’s a beautiful place surrounded by huge vertical rocks from all sides. Hojimoy-Ota is a famous place of pilgrimage for both locals and people from other regions of Uzbekistan.

-     Kaptarhona Canyon. Once it was a wild and little-visited canyon. The canyon got its name (mean - dovecote) for the pigeons that nested here long time ago. This picturesque canyon consists of wondrous turns among its cliffs and boulders scattered in the middle of a narrow path. The walls of the canyon are cut by various terraces, cornices and have many shallow "caves".

-     Lunch (Lunch boxes. The menu can be customized depending on the preferences of the group)

-     Transfer to base camp. You will go to the top of a nameless mountain (2700 m) using off-road vehicles. From Kyzyl Naur village, you will pass 15 km off-road. Our path will run along mountain roads through juniper forests and huge pastures. The alpine meadow near the top of the nameless mountain will be the final point of our journey, where we will set up our base camp. Preparation for the ascent. Dinner.

-     The ascent to the top of Khoja Gur Gur Ota (3720 m). Our track will pass through a vast mountain pasture, after which we will ascend on a giant slab of melted basalt, resembling a wide concrete road, which will lead us to a picturesque horizontal canyon. Exit from the canyon will make us feel we are on another planet. Here begins the ascent to the top of the massif, where the slope is covered with basalt shards of the most bizarre forms resembling claws of dinosaurs and different animal figures). When you climb to the top you can feel yourself standing on a huge wall that divides one world from the other.

-     The ascent to the top of Khoja Buz Barak (3920 m). We will climb 500m high to bypass the canyon which rises to the mark of 3500 m. Then we will pass all the peaks of the Chal mountain (3586 m) by traverse and will get onto a huge rocky plateau. After that, we will slowly rise and come out to the edge of the plateau at an altitude of 3700 m. Here we have to go around the false tops of Khodja Buz Barak; there are two of them. At the highest points we will stop to make wonderful photos; the nature here is very beautiful and unusual. We will proceed further down to the saddle and after bypassing cornices we will approach the top take-off. Having climbed to the top you can feel yourself standing on a huge wall dividing one world from the other. Beautiful panorama to the Chulbair mountain will open to you on the East, the ridges of the Hissar national park on the North-West.

As a bonus to the ascent, you will be able to see traces of a relatively big dinosaur (4-5 m large). This assumption is based on the step width and the size of its traces. The beast lived or passed there when this peak was only a part of the shore of the ancient sea. This paleontological object is located at an altitude of about 3800 m.

-    Returning to Baysun. You will return to the guesthouse where we stayed on the first day. Here you can take a shower and get a rest after active travel.
-    Festive dinner
-    Transfer to the train station. Departure

-   Arrival in Tashkent (or another city) 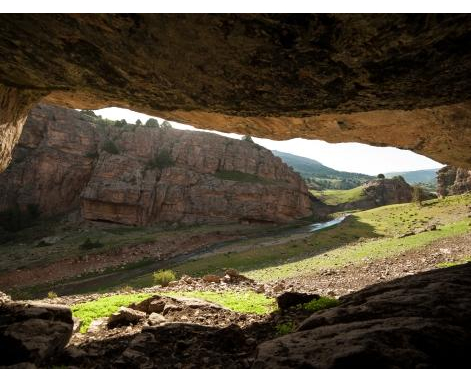 Lost Worlds of Ancient Kesh
Tashkent – Urgut – Kitab - Katta-Lyangar - Kyzyl Gaza Pass - Kashkadarya region - Tashkent
$1200 6 days
View details
Fascinating journey to the lands of ancient Kesh. You will visit the Sarymas ridge, see and walk through the deepest gypsum Kaptarkhona cave, a kilometer long. You will visit the mountains of ancient Kesh, look over the side of Zarmas which is one of the largest canyons of Uzbekistan. 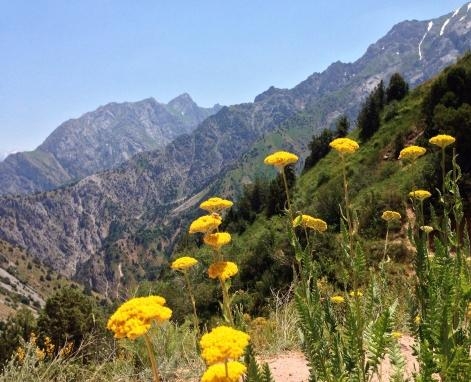