All travellers who set out for Central Asia hold in their hearts the dream  of reaching Samarkand. And we were no exception.

Centre of the Universe, Mirror of the World, Garden of the Soul, Pearl of the East, Jewel of Islam, this fabled oasis on the eastern edge of the Kyzylkum Desert has had merchants and soldiers, poets and pilgrims waxing lyrical for almost three millennia. In the third century ВС Alexander the Great took Samarkand without a fight and declared, 'Everything I have heard about the beauty of the city is true, except that it is much more beautiful than I'd even imagined.' In the thirteenth century the celebrated Moroccan traveller, Ibn Battutah, discovered, 'one of the largest and most perfectly beautiful cities in the world.' And in 1898 Lord Curzon was to write, 'I know of nothing in the East approaching its simplicity and grandeur; and nothing in Europe which can even aspire to enter the competition.' Even today, after seventy years of intrusive Soviet industrialisation, the Pearl of the Kast still holds an enigmatic wonder. Standing in Registan Square, surrounded by exquisite fluted domes, mosaiced madrassahs, the majestic arches and towering minarets, the romantic mind drifts easily back to a mystical time of fables, myths and legend: to the world of Omar Khayyam and his famous Rubaiyat, to the colourful Sogdian and Samanid courts; to the slaughter streets of Genghis Khan and Tamerlane's renaissance; to the lands through which Marco Polo, Xuan Zang and a thousand other great travellers passed. For me, nowhere symbolised the romance of our journey more than Samarkand. Little wonder then, given the sadly unfulfilling nature of our trip so far, that our stay in the city of famous shadows, as it has also been known, turned into a nightmare.

Lying in the river valley of the Zerafshan (gold-strewer) and flanked by Pamir-Alai mountain spurs, this fabled oasis at the fringes of the Kyzyl Kum desert has never lacked breathless admirers. Another name, City of Famous Shadows, reveals Samarkand as witness to the full sweep of Central Asian history. Up to 40,000 years ago, natural bounty drew Palaeolithic man to the area. The city proper claims equity with Rome and Babylon, for archaeologists date urban settlement at least to the sixth century ВС. Until the 16th century, Samarkand was always the first city of Transoxiana in population, commerce and culture, for fertile earth rewards the farmer and trade routes west to Persia, east to China and south to India met here to form a major Silk Road crossroads and emporium. Among conquerors to cast their shadows were the Macedonian Alexander the Great, the Mongol Genghis Khan and, above all, Tamerlane, whose capital of fluted domes and sky-blue mosaic excites the traveller even today.

Sweet to ride forth at evening from the wells
When shadows pass gigantic on the sand,
And softly through the silence beat the bells
Along the Golden Road to Samarkand.
We travel not for trafficking alone:
By hotter winds our fiery hearts are fanned:
For lust of knowing what should not be known
We make the Golden Journey to Samarkand.

These final lines of James Elroy Flecker’s 1913 poem The Golden Journey to Samarkand evoke the romance of Uzbekistan’s most glorious city. No name is so evocative of the Silk Road as Samarkand. For most people it has the mythical resonance of Atlantis, fixed in the Western popular imagination by poets and playwrights of bygone eras, few of whom saw the city in the flesh. From the air your eye locks onto the domes and minarets, and on the ground the sublime, larger-than-life monuments of Timur, the technicolour bazaar and the city’s long, rich history indeed work some kind of magic.

Samarkand, until the Russians arrived in 1868, was a great deal more remote from the rest of civilisation than the moon is today. Yet, with Bukhara, it was virtually inaccessible once the Silk Route had been superseded by the sea passage to the East; so isolated from the normal traffic of humanity that, in the four hundred years up to 1850, only two Europeans are said to have succeeded in reaching it.

Buildings of breathtaking beauty in the heart of regal Samarkand caught imaginations long before Fleckers and have continued to do so ever since. Medieval merchants must have marvelled at every sight, from the exotic goods on sale to the spectacular manmade backdrops of madrassas, mosques and mausoleums. Centuries on, visitors are still struck by the beauty, the number and the scale of Samarkand's architectural sites, and are often moved by thoughts of the ambition, dedication and, no doubt, personal sacrifices required to turn dreams into concrete reality.

The Registan, with its central square and three exquisite madrassas, is Samarkand's biggest draw and makes a picture-postcard scene. It's far from the only attraction, however, as the ruins of Afrosiab, the observatory of Ulug Beg and the Shah-i Zinda, the necropolis of the Living King, are sights that you'll never forget. The time of year you visit Samarkand will have a significant impact on your experience: coming out of season, especially in the autumn months, will enable you to get close to the buildings physical details and to linger as long as you like. The city always was a bustling, cosmopolitan place, however, so even if you are sucked into the summertime crowds, your experience will be no less authentic: the residents of Samarkand have for centuries made money from the foreigners passing through.

Surrounding these islands of majesty, modern Samarkand sprawls across acres of Soviet-built buildings, parks and broad avenues. You can visit most of Samarkand’s highprofile attractions in two or three days. If you’re short on time, at least see the Registan, Gur-e-Amir, Bibi-Khanym Mosque and Shah-i-Zinda. Note that the people of Samarkand, Bukhara and southeastern Uzbekistan don’t speak Uzbek but an Uzbek-laced Tajik (Farsi).

A map of Samarkand’s centre shows the city’s Russian-Asian schizophrenia. Eastward are the tangled alleys of the old town, whose axis is pedestrian Tashkent kochasi. Across town, shady 19th-century Russian avenues radiate westward from Mustaqillik maydoni, the administrative centre of the new city and province. Most sights are within a couple of kilometres west and north of the Registan.

Let alone the distances, the plain at our feet was striking enough. Closed by the glimmer of mountains to east and south, and on the north by the range we stood upon, this plain lay open to the west, receding into remote distances of sandy haze far beyond the fertile expanse glittering with cities which lay below us in the heat. That way, to the west, led to Bokhara. At the plain's southern limit flows the Oxus where it forms the frontier of Afghanistan. Balkh, the oldest village on earth, lies not far across the Oxus. This is the heart of Asia.

Journey to Khiva by Philip Glazebrook 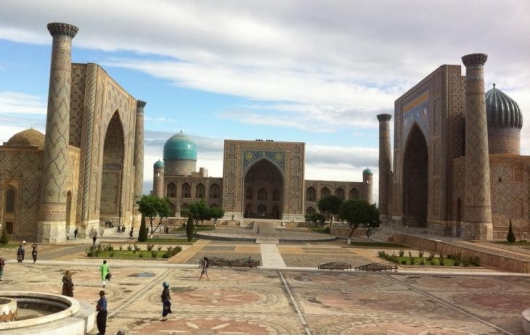 The Registan
Samarkand
The Registan ensemble at the heart of Samarkand, restored to its original splendour, ranks first in Central Asia and among the greatest of all the grandiose and magnificent works of the Islamic world. Samarkand's central square, will make even the most architecture-weary visitor stand up and take note.

Shah-i-Zinda
Samarkand
The holiest site in Samarkand is a necropolis of mausoleums climbing back in time from the northeast fringe of Tamerlane's capital over the old city wall and onto the southern slope of ancient Afrosiab. This is Samarkand’s most moving and beloved site, the stunning avenue of mausoleums (working hours 8am-7pm Apr-Oct, 9am-5pm Nov-Mar) contains some of the richest tilework in the Muslim world. 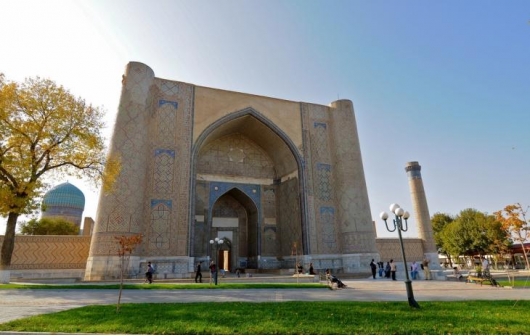 Bibi-Khanym Mosque
Samarkand
Two of the three buildings once associated with Bibi Khanym, Timur's Chingizid wife, are still standing. The third, a madrassa with a portico so large that it rivalled that of the neighbouring mosque, was destroyed by Nadir Shah's Persian troops when they invaded in 1740. The Bibi Khanym Mosque is one of Samarkand's most impressive sites, but also one of its most controversial due to the heavy reconstruction that has taken place: what you see before you is an almost total rebuild dating from the 1970s. 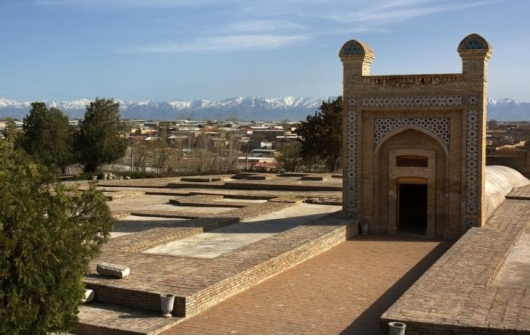 Ulug Beg Observatory
Samarkand
Medieval Samarkand was a centre for both religious and secular learning, and his rulers patronised the sciences as well as the arts. Ulug Beg's Observatory, one of the largest astronomical observatories of the period, lies a brisk, ten minute walk past Afrosiab and into the foothills.
Tours in Samarkand
View all tours in Samarkand

Sufi tour in Uzbekistan
Tashkent - Samarkand - Bukhara - Tashkent
$900 8 days
View details
Take this 8 days Ziyarat Tour to explore the sacred destinations in Samarkand, Bukhara and Tashkent, to visit the resting places of great scholars of Islam. The highlights of the trip are visits to Imam al Bukhari’s memorial complex, the collector of the hadith “Sahih al-Bukhari” and to the architectural complex of Khwaja Baha ad-Din Naqshband, the Master of the “Naqshbandiya” order.

Uzbekistan Pilgrimage Tour
Tashkent - Bukhara - Samarkand - Kitab - Sherobod - Termez - Denau
$1100 8 days
View details
During the tour you will have opportunity to make pilgrimage to the graves of great theologians of Islam as well as to other sacred places. The highlights of the trip are visits to Imam al Bukhari’s memorial complex, the collector of the hadith “Sahih al-Bukhari” and to the graves of great Sufi leaders.
Other hotels in Samarkand
View all hotels in Samarkand