"At first sight, Khiva had a shabby, provincial and slightly disappointing feel to it. It was only as we turned the corner at the bottom of the road that the Ichan Kala loomed in front of us. The bulging mud-brick walls wound around a crowded centre of madrassahs, mosques, minarets and mausoleums like a large bronze snake basking in the autumn sun. Nearing the walls, we could see their crenellations and the impressive watchtower, giving the appearance of an elaborate sandcastle. Four enormous, turreted gates led into the inner city from the four points of the compass. We approached the Grandfather Gate and Jeanette introduced us to a plump woman who sold entry tickets. We would pay admission this time but, seeing as we were living in Khiva, wouldn't pay again. This was, after all, one of the main thoroughfares for getting to the bazaar."

"'It's a dry heat, a dry heat.' I kept repeating this mantra, but as the thermometer crept above 40°C and continued, I accepted that dry or humid, the weather was unbearably hot. We had no air-conditioning in the office so I would douse my T-shirt in water and put it on wet, the table-fan by the computer on full blast. The walled city was even worse - the huge mud-brick walls retaining the heat - and my bedroom was impossible to sleep in. I dragged my mattress up to the roof, joining the boys under the stars and enjoying the occasional night breeze. Getting up early felt unnatural but this was the only time when I had any energy. The summer days were long and the sun set around eight at night. I would return from the office, the slanted rays turning the Ichan Kala walls bronze. Girls spattered water from buckets around their house to settle the dust and take the edge off the heat. Grannies sat in the shade of a tree gossiping, and as the evening wore on, families dragged their televisions outside ready for the evening meal."

Khiva is one of the largest and most ancient city centres of the Khoresm agricultural oasis, located in the southern delta of the Amu Darya River, south of the Aral Sea, in the west of the Central Asia. The Kyzyl-Kum desert begins here.

It is rare to come across an entire city that is a museum. Though Bukhara is packed with remarkable sites it is still nonetheless a living, working city. Khiva (population 50,000), however, is more akin to a film set, the local population, rightly or wrongly, sidelined in order to preserve historic buildings and present a manicured scene to tourists.

Indeed, Khiva is the most intact and most remote of Central Asia's Silk Road cities, the final destination of a trip back through the centuries from socialist Tashkent to medieval slave town. Where Samarkand leaves the imagination exhausted, Khiva's khanate romance is plain to see and where Urgench lies restricted to two dimensions, Khiva revels in all four, as visions of the past float through its narrow streets like superimposed film: the Ichon Qala in particular is a labyrinth of madrassas and mosques, minarets and trading domes that, at least on the surface of it, look just as they would have done at the end of the 19th century before Soviet town planners, demolition crews and modernist architects got their hands on Uzbekistan. On a cold winters evening, after the wedding parties have departed and the few tourists are enjoying their supper, you can be entirely alone with the ghosts of the past, wandering the narrow streets and soaking up the atmosphere. Which decade, indeed which century, you care to imagine yourself in is entirely up to you.

There are number of national legends about Khiva and the origin of its name. One of them attributes the city's foundation to the son of the biblical Noah - Sim, where it is said that Sim, after the Flood, he found himself wandering in the desert alone. Having fallen asleep, he dreamt of 300 burning torches. On waking up, he was pleased with this omen, he founded the city with its outlines in the form of a ship mapped out according to the placement of the torches, about which he had dreamt. Then Sim dug out the "Kheyvak" well, the water from which had a surprising taste. It is possible to see this well in Ichan-Kala (an internal town of Khiva City) even today.

Khiva’s name, redolent of slave caravans, barbaric cruelty and terrible journeys across deserts and steppes infested with wild tribesmen, struck fear into all but the boldest 19th century hearts. Nowadays it’s a mere 35km southwest of Urgench, past cotton bushes and fruit trees.

It is free to wander around both the Ichon Qala and the Dishon Qala and to enter some of the buildings. A single entrance ticket (US$12) covers the various small museums, entrance to the mosques etc and is available from the booth at the Ata Darvoza (West Gate).

Khoresm was the scene of many battles and skirmishes for Alexander the Great, and the Arabian army. Under the command of Kuteyb ibn-Muslim, his army attacked Gurgandzh (the former capital of Khoresm) in 680, but could not permanently subduo the state for any length of time. After some centuries, Genghis Khan's united army managed to rush into the capital of the powerful state of Khoresmshah-Anushtegenids - Gurgandzh after a year long siege, having destroyed the dams on the Amu Darya River. A consequence of which was that the water of this turbulent river rushed into the city and practically wiped it from the face of the earth. However, the capital of Khoresm revived 200 years later.

Between the IX and XII centuries, a number of Muslim educational institutions, and large centres of science functioned successfully in Khoresm: schools of astronomy, mathematics, medicine and chemistry. The most well known was the Mamun Academy of Khoresm, which recently celebrated its 1000th anniversary; joined by the world community under the aegis of UNESCO. Muhammad-al-Khoresmi's fundamental works in mathematics, geography, and geodesy were already known in Europe by the IX century, and have not lost their importance to the present day. Al-Biruni, Agakhi, Nadzhmiddin Kubro and other scientists and seminary students, whose names are also connected with Khoresm, have left a rich, scientific and cultural heritage.

Amir Timur pursued five campaigns in Khoresm in the XIV century, but only in 1388 did he manage to win it completely. In due course, Khoresm blossomed again, and for a short period became one of the most important spiritual centres of the Muslim world. After Khiva's khanate was formed at the beginning of the XVI century, Khiva became its capital in 1598.

A major aspect of modern Khiva is characterised by the architecture of the Khivan khanate from the end the XVII century until the beginning of the XX century. However, archaeological excavations recently conducted here, show that in the basis of some rather "young" buildings rests ancient layers connected to the III and earlier centuries BC.

The historic heart of Khiva has been so well preserved that it’s often criticised as lifeless – a ‘museum city’. Even if you subscribe to that theory, you’ll have to admit that it’s one helluva museum. To walk through the walls and catch that first glimpse of the fabled Ichon-Qala (inner walled city) in all its monotoned, mud-walled glory is like stepping into another era. History is just a sniff away here.

The architectural monuments of Khiva are of unique value to the world. In the list of values of universal importance, Khoresm occupies a special place, as one of the centres of world civilisation and an important centre on the Great Silk Road. The city of Khiva was one of the first in Central Asia to be added to the UNESCO list as a place pertaining to the world heritage of mankind in 1990. Khiva celebrated its 2500th anniversary under the aegis of UNESCO in 1997.

You can see it all in a day trip from Urgench, but you’ll take it in better by staying longer. Khiva is at its best at dawn and by night, when the moonlit silhouettes of the tilting columns and medressas, viewed from twisting alleyways, work their magic.

There’s not much reason to stray too far from the compact and user-friendly Ichon-Qala. Most sights are around its main axis, Pahlavon Mahmud, running between the West and East Gates. Walking through Ichon-Qala’s North Gate brings you into the new town, where banking and postal facilities are located. 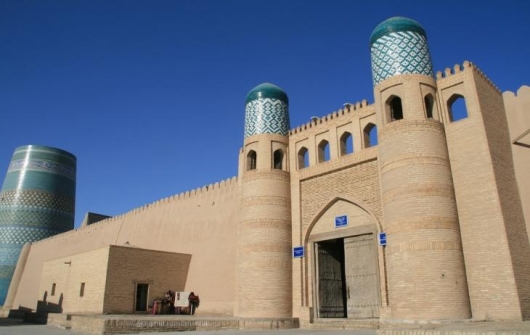 Kuhna Ark
Khiva
Kuhna Ark – the Khiva rulers’ own fortress and residence, first built in the 12th century by one Ok Shihbobo, then expanded by the khans in the 17th century. The Ark became "a city in a city" at the end of the XVIII century, separated from Ichan-Kala by a high wall. 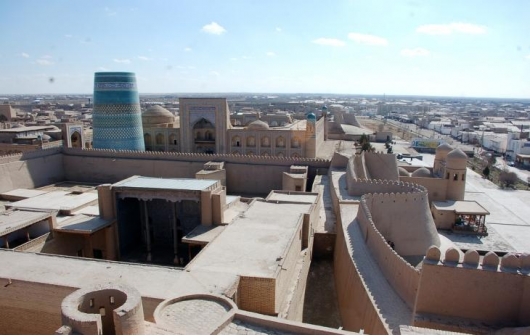 Ichan-Qala
Khiva
The internal city occupies an area of about 30 hectares and has a rectangular form. Khiva was located in the limits of the Ichan-Kala fortress in the XVI and XVII centuries and is surrounded by a powerful clay wall with a height reaching 8-10 m, and in parts 6-8 m thick and a length of more than 2200 m. 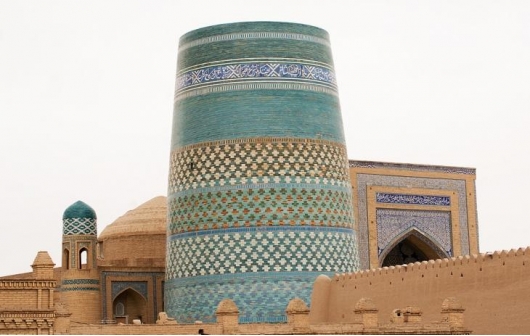 Kalta-minor
Khiva
The main facade of the Muhammad Amin-khan madrasah has a massive low minaret. They were going to complete the main city area at the western Ichan-Kala gate with the minaret and madrasah construction. The minaret was intended to become the largest in Central Asia, had it been completed. 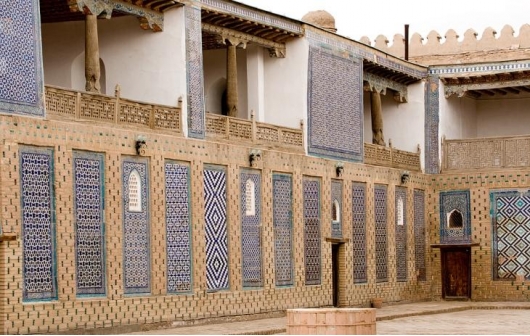 Tash Khauli
Khiva
This palace, which means ‘Stone House’, contains Khiva’s most sumptuous interior decoration, including ceramic tiles, carved stone and wood, and ghanch. Built by Allakuli Khan between 1832 and 1841 as a more splendid alternative to the Kuhna Ark, it’s said to have more than 150 rooms off nine courtyards, with high ceilings designed to catch any breeze.
Tours in Khiva
View all tours in Khiva

best seller
Turkmenistan + Uzbekistan
Ashgabat – Mary – Bukhara – Samarkand – Tashkent
$1190 8 days
View details
Within this 8 days tour you will visit 2 so different and yet so close Central Asian countries. You will experience the local colour of Ashgabat (best described as a merging of Pyongyang and Las Vegas!) and have an excursion to ancient Merv, probably the most important city in the world at certain times of its history and a place where you will learn a great deal about the history of Central Asia, the rise and fall of dynasties and cities, the silk road, and human civilization in this part of the world in general.
Other hotels in Khiva
View all hotels in Khiva

Asia Khiva hotel
Khiva
$65
View details
A comfortable hotel within easy reach of all that needs to be seen in Khiva. It's, supposedly, best or second to best in Khiva, take it; Khiva makes the effort worthy! Service is on a downside, but again for the service better go to smaller boutique hotels that are family run and treat the guests as their own friends. For a short stay of 2 to 3 days, the hotel fits the bill.
Room facilities