On the hilltop around and beyond the observatory, in the pleasure garden Tamerlane had planted for his infant grandson, Ulug Beg erected a hall of Chinese porcelain and a two storey summer palace, Chihil Sutun (Forty Pillars), a marvel of fluted, twisted stone columns. The only survivor is a shrine to Chupan Ata (Father of Shepherds), a pre-Islamic figure of legend adopted as patron both by nomads and the city of Samarkand.

Built for pilgrims in the 1440s, its high, cylindrical drum still bears a Kufic inscription in coloured tiles, but the tombstone in the mausoleum chamber has no grave below it. A legend connects Chupan Ata with the arrival of Islam. When the first three Arab missionaries reached the city, they rested on this hill to determine their future journeys by cutting up and boiling a sheep. Chupan Ata put his hand in the pot and drew out the head, which gave him first choice; he chose to remain in Samarkand. Another drew the heart and decided to return to Mecca, while the third got the hindquarters and elected Baghdad. Thus Samarkand was called the head and Mecca the heart of Islam (Baghdad wisely ignores the legend).

Mazar is located on the north-eastern side of Samarkand, on a high cliff and can be seen from anywhere in Samarkand. The shrine, also visible from the Shah-i-Zindah and the Tashkent-Samarkand road, lies a 45-minute walk from the observatory beside a military installation, so maps omit its location and visitors are discouraged.

By design, the mazar differs from the burial structure. It rather resembles a mausoleum, although archeologists had not found any traces of the burial.

From the closer inspection the Chupan-ata mazar represents a not very large room with four arches, with one dome outside and one inside the building. The color scheme of the mazar is not rich.

Architects used only a few colors: the building itself is made in the color of the soil, and the domes are gleaming from blue to turquoise.

On the Tashkent side of the hill, bus passengers may also spot the Zerafshan Arches crumbling into the river downstream of the railway bridge. While popularly ascribed to Tamerlane or Abdullah Khan, another energetic builder, they probably formed part of a chain of water channeling bridges erected by the latter's ancestor Shaybani at the beginning of the 16th century.

Chupan Ata is a cult place, for centuries attracting the attention of travelers, dervishes, pilgrims. At the beginning of the last century the mazar and the hills were captured by the famous Russian photo artist Sergei Mikhailovich Prokudin-Gorsky, for whom Chupan Ata was primarily the place where on May 1, 1868 Russian troops under the command of General K. Kaufman defeated the army of Emir Muzaffar, that resulted in Samarkand to join the Russian Empire. Ironically, this victory was won at the hill, which for centuries was a symbol of its security for the residents of the city. 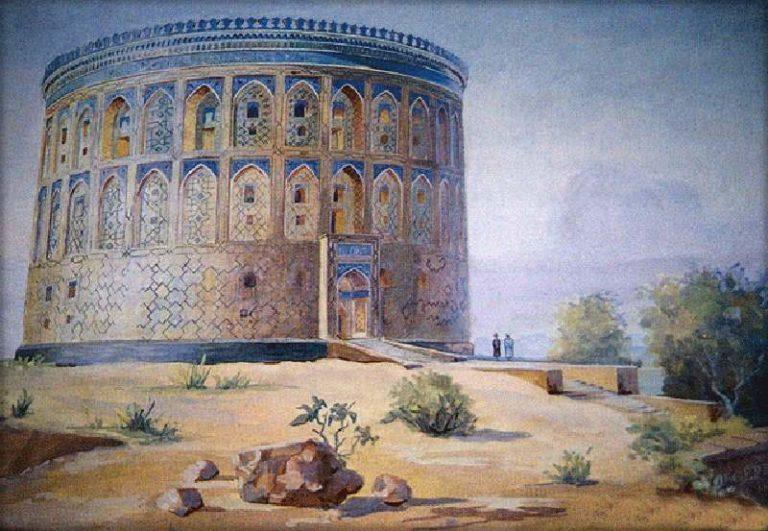 The photographs of Prokudin-Gorsky are undoubtedly the first and for many years the only image of Chupa Ata. The foot of the Chupan Ata hills was not always the way we see it in photos. Under Amir Timur, the beautiful garden of Bagi Maidan was set up here, where later, during the reign of his grandson Ulugbek, a two-storey country palace Chil-sutum was built. Nearby there was a garden complex of Bagcha with a porcelain pavilion - Chinnikhon. A detailed description of these magnificent buildings has been preserved in the famous Baburname by Zakhriddin Babur. Not far from these buildings Mirzo Ulugbek erected and equipped an astronomical observatory known to the whole world. To date, only a fragment of its sextant has survived.

The construction of the capital of the Sogdian kingdom - Marakanda, as it was called in ancient times Samarkand, was originally conducted on hills with steep slopes surrounded by water. The rivers Sieb and Obi Mashad further increased the inaccessibility of the city-fortress. But Samarkand, despite all the efforts of the townspeople to strengthen and protect it, for centuries suffered cruel raids and destruction. The legend of Chupan Ata describes only one episode from the tragic history of the city. Against the background of all the misfortunes of Samarkand, it seems insignificant. Why are these hills so important for historical memory? 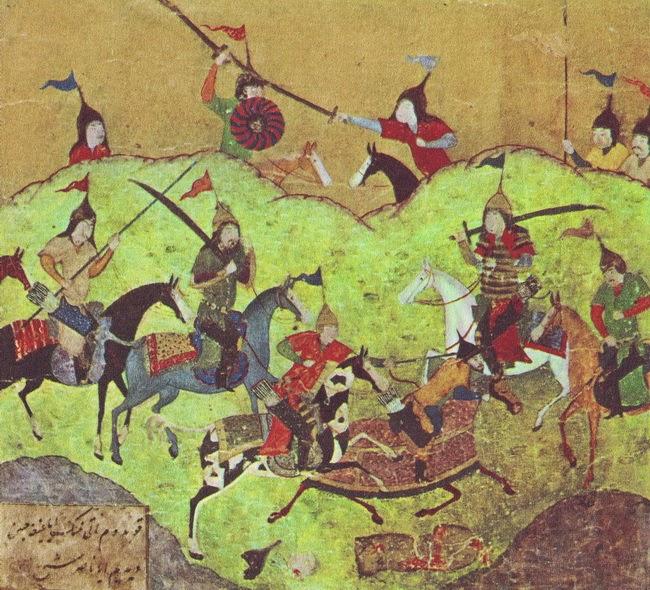 According to legend, the area to the northeast of Samarkand was a plain. Many centuries ago it was on this plain that another conquerors came to the city. The forces were unequal, it was useless to resist. The inhabitants began to pray their gods for help, but the enemy advanced. Then all involuntarily united and together began to pray to one God. And a miracle happened. At night, a mountain fell upon the army, forever burying the enemy under them.

The city was saved. In the morning, the surprised residents went to see the mountain-rescuer and met a shepherd on it, from the conversation with whom they learned that he had flown with a mountain from Syria. As evidence of truthfulness, legends tell us that the soil of the hill is different from that at the foot, and here military armor are often found during excavations. 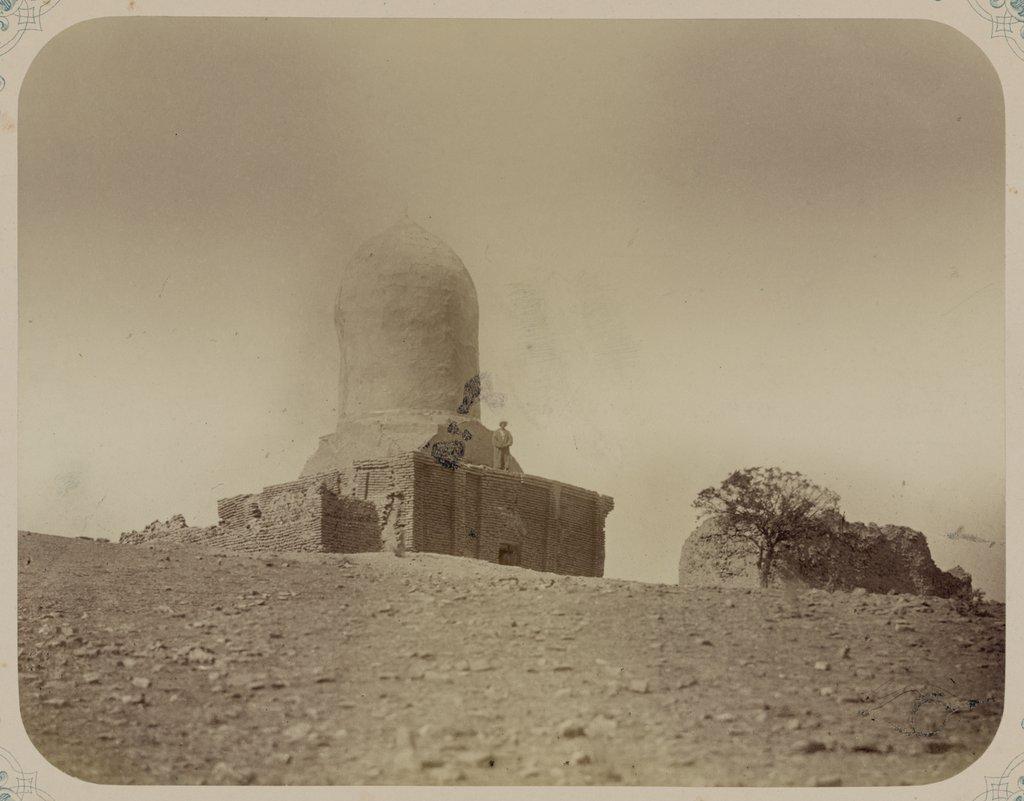 This photograph of the Chupan-Ata mausoleum on the outskirts of Samarkand (Uzbekistan) is from the archeological part of Turkestan Album. The six-volume photographic survey was produced in 1871-72 under the patronage of General Konstantin P. von Kaufman, the first governor-general (1867-82) of Turkestan, as the Russian Empire’s Central Asian territories were called. The album devotes special attention to Samarkand’s Islamic architectural heritage. This view of the mid-15th century Chupan-Ata mausoleum (mazar) reveals severe damage to both the structure and the dome, as well as to the surrounding wall of sun-dried (adobe) brick. The elevated position of the structure might have increased the risk of damage in this active seismic zone, yet the high dome, raised on a cylinder, is structurally intact. The name of the mazar means “father of shepherds,” a reference to a popular local cult. No traces of ceramic decoration remain; the exterior seems to have been surfaced with a stucco-like material as a conservation measure. The mausoleum has a centralized design, with four arches rising from the basic cuboid structure and beveled corners buttressing the cylinder beneath the dome. The figure standing on the roof gives an idea of the scale. The sun-baked ground appears to be littered with brick rubble.

Uzbekistan Pilgrimage Tour
Tashkent - Bukhara - Samarkand - Kitab - Sherobod - Termez - Denau
8 days
View details
During the tour you will have opportunity to make pilgrimage to the graves of great theologians of Islam as well as to other sacred places. The highlights of the trip are visits to Imam al Bukhari’s memorial complex, the collector of the hadith “Sahih al-Bukhari” and to the graves of great Sufi leaders.
Popular hotels in Samarkand