The ancient garden Chor-Chinor (translates as ‘four plane trees’) is one of the most interesting places in Urgut. The garden is about 3 km from Urgut’s city center with very picturesque road leading up to the tree grove. Narrow, winding long streets, high clay houses, colorful ethnos: it all resembles the quarters of the old part of Bukhara. Only this time not in the horizontal state, but in an oblique projection - all these streets and houses are located on both sides of the Urgutsay (small mountain river) and gradually lead up the gorge.

The garden is a depression between hills shaded by fifty very old plane trees that feed on waters from a holy spring. Each tree is accompanied by information board with their approximate age, which ranges from 800 to 1,200 years. Some of the elder trees measure 10 m in circumference. Today it is hardly possible to say which of those gigantic trees were the first four specimens that started the famous garden.

In southern Uzbekistan there are several ancient and venerable plane trees, possibly remaining from pagan sacred groves, and the Urgut’s Chor-Chinar are the largest and most famous of them. Legend, on the contrary, says that these plane trees were planted by one of the Arab generals, who converted Urguti to Islam. It also might be the case that there is nothing to do with religion - just for some reason these trees were not chopped, they grew and grew and grew to the extent that people started composing legends about them.

The largest tree is 35-meter in height and 15-meter in girth and is 1170+ years old, and inside its roots some master by the name Ergash cut out a room with a door that originally served as a chillahana (cell for solitary prayers), and later as a rural school. Hence the name Mekteb-Chinar, that is, the School tree. And it really can accommodate a couple of dozen students on mats and a sobersides teacher. The base of the tree forms the ceiling, and the whole space of the cave is situated under the ground. In some parts the walls are reinforced with brickwork, and the entrance is blocked with a carved door with a lock. A special man, the keeper, unlocks the door for the visitors.

There are also two mosques in Even in the grove: The Old one (1914-16, on the photo below) and The New one and numerous graves around them. 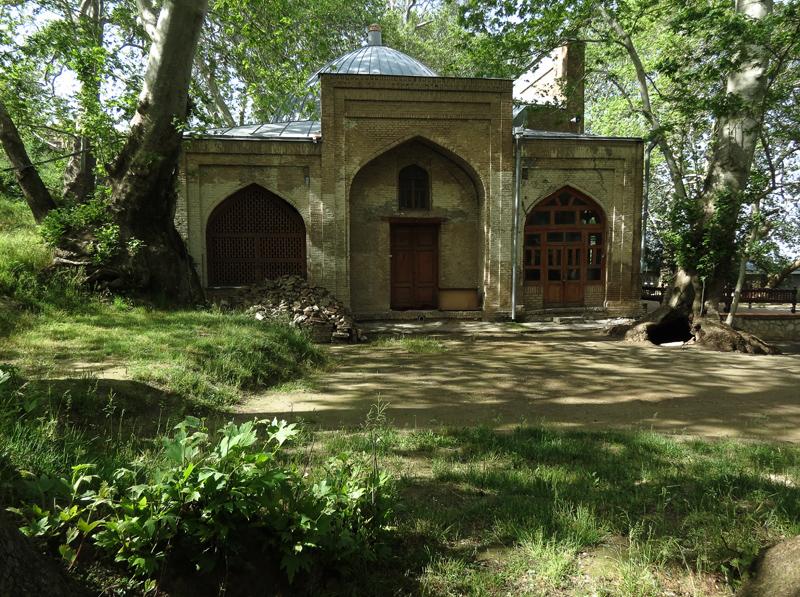 Under the gazebo is the grave of the semi-legendary Abu Talib Sarmast, an Arab commander who ruled Urgut in the 9th century and allegedly planted the first plane trees under which he asked to be buried. In principle, the age of the same school plane tree is quite consistent with those times: 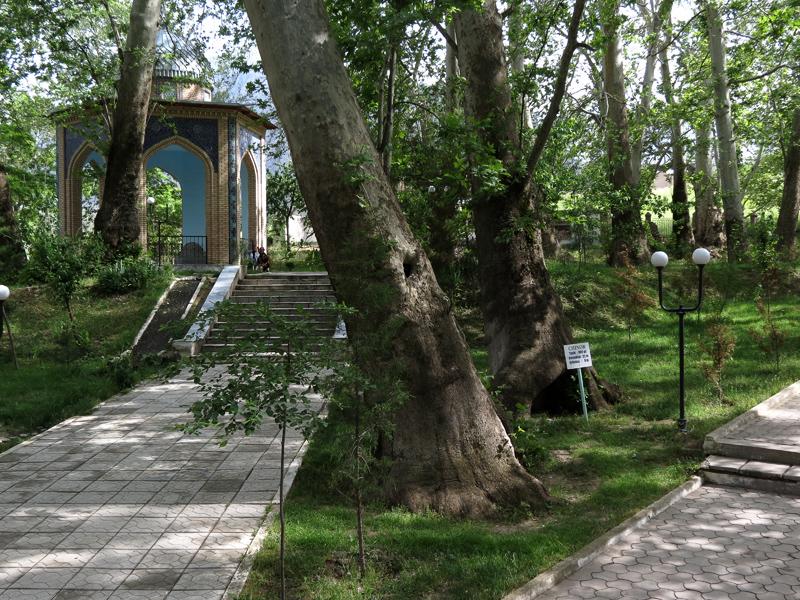 Other plane trees as if spread over the ground at the base of the trunks: 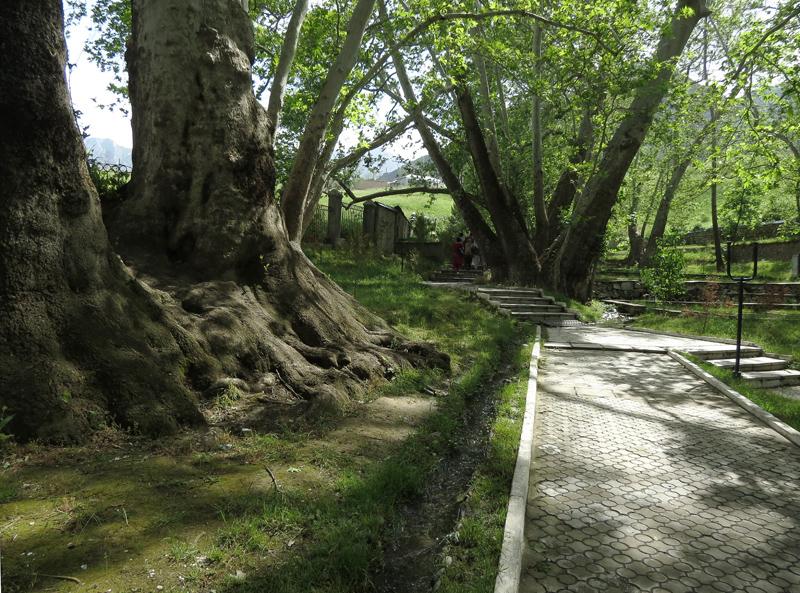 Others started up new trunks up from the roots: 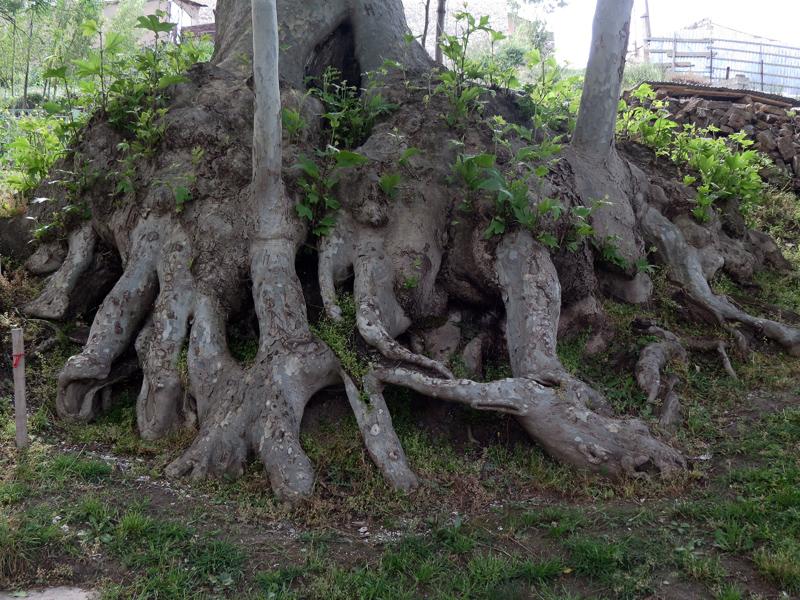 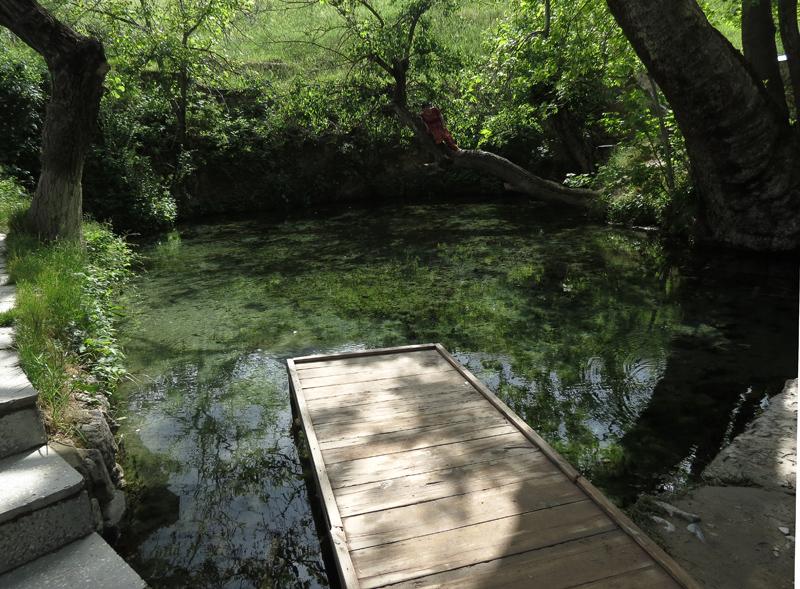 And in the water, bright red koi (Japanese decorative carp) and local marinka: 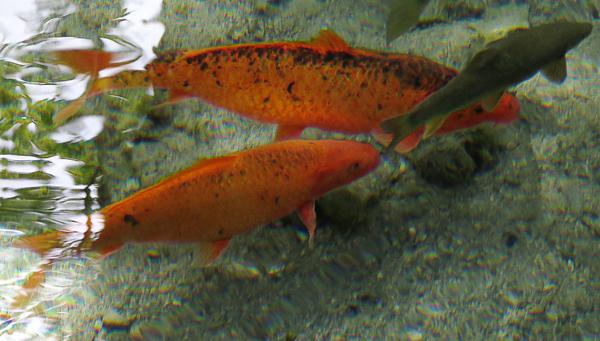 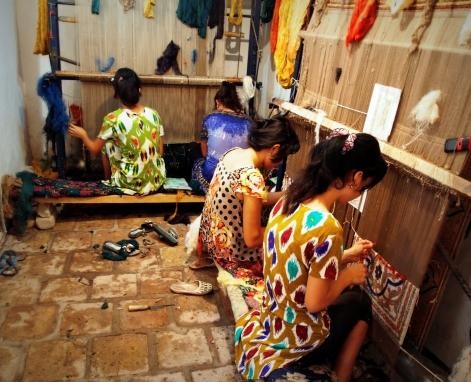 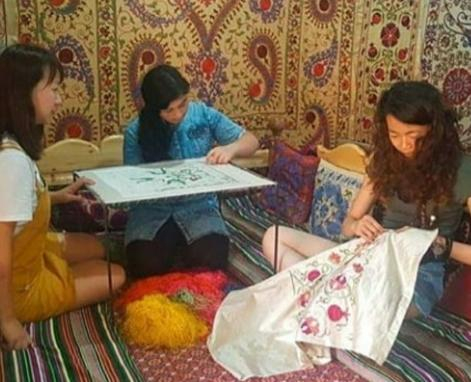